Mets and Yankees pay tribute on 9/11 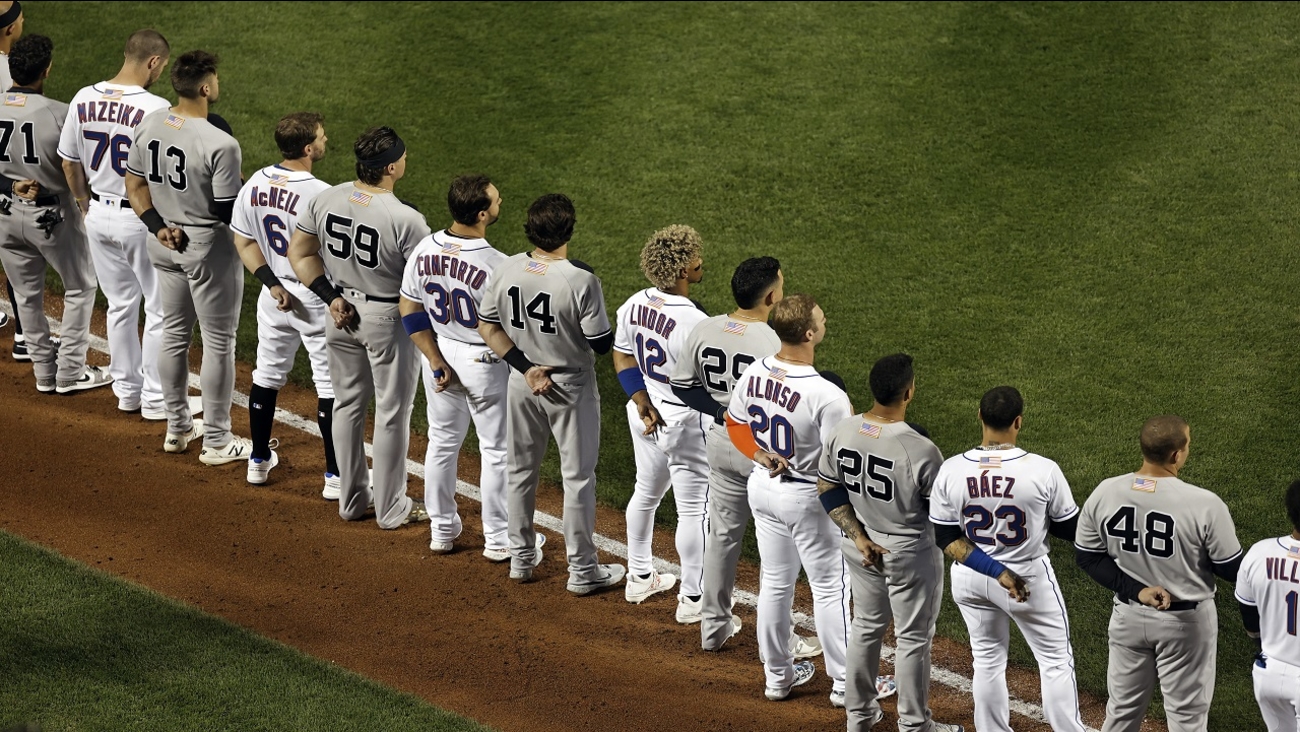 AP
FLUSHING, Queens -- Jacob deGrom stood next to Gerrit Cole along the first-base line, and Brandon Nimmo wedged between Aaron Judge and Giancarlo Stanton on the other side.

Shoulder to shoulder and interspersed, players from the New York Mets and Yankees shared the diamond during the national anthem Saturday night at Citi Field with first responders, former players and a giant ribbon imprinted with the American flag.

The city's baseball teams held a Subway Series game on Sept. 11 for the first time on the 20th anniversary of the 9/11 attacks, as stadium's around the country paid tribute to the nearly 3,000 killed in the terrorist attacks. A raucous, emotional crowd packed the stadium in Flushing 45 minutes before first pitch, waving American flags and holding signs promising to "Never Forget" during a ceremony that included over a dozen Mets players from the 2001 team and representatives from several organizations and charities related to first responders and victims.

The stadium buzzed in a way it hasn't since before the coronavirus pandemic as Mike Piazza, John Franco and other Mets alumni accompanied members of New York's fire, police, EMT, sanitation, correction and court officers along the outfield warning track.

The loudest cheers came for Piazza, a Hall of Famer who memorably hit the go-ahead homer in the eighth inning when the Mets beat the Atlanta Braves on Sept. 21, 2001, in the team's first game back at Shea Stadium. Highlights of that game were played on the video board before Bobby Valentine and Joe Torre - the 2001 managers of the Mets and Yankees, respectively - threw the ceremonial first pitches.

"For me, especially when this date comes by every year, it is difficult to kind of look back, and the images, for me and I'm sure a lot of people, are still very vivid in their minds," Piazza said. "I think it's a wonderful thing that we do, continue to honor them."

In a sign, perhaps, of how much healing has happened since, fans in Queens booed loudly when Yankees star DJ LeMahieu was introduced for the game's first at-bat.
Both teams wore hats representing New York's first responders, two years after Mets slugger Pete Alonso said the league rejected his proposal for specially designed caps doing the same. Alonso instead had custom cleats made for each of his teammates - without asking MLB for permission - and later donated his shoes to the National September 11 Memorial & Museum.

Alonso, who was 6 years old and living in Tampa, Florida, at the time of the attacks, has made multiple visits to the museum and was at Ground Zero on Saturday morning, part of ongoing work he's done to benefit 9/11 survivors still plagued by health woes caused by exposure to the rubble.

"Today is a day of remembrance," Alonso said. "Not just that day, but there's still people being impacted every single day."