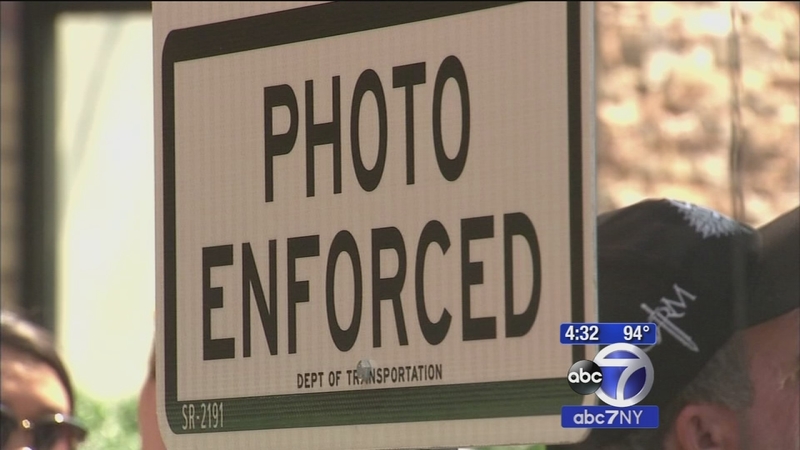 NEW YORK (WABC) -- New York City has new tools to keep kids safer at they head back to school. Speed cameras will be in place across the city in hopes of getting drivers to slow down.

The majority of the cameras will be stationary, but a few will be roving.

As the school year begins, the city announced Tuesday that the full installation of its speed camera program is complete.

When classes begin at city schools, students may not be looking out for a speeding driver as they cross the street. But chances are there will be a speed camera parked to catch that driver.

40 mobile speed cameras will fan out across the city Wednesday when school begins. The radar will track your speed a quarter of a mile in either direction of the school and the camera will then grab a picture of the car.

Transportation officials rolled out a warning and the mobile cameras on the day before school begins. Ready ahead of time, there will be 100 more fixed cameras in school zones.

"Our goal is to send a clear message. You can see our signs. We are putting them all over the city, drive at a safe speed," said DOT Commissioner Polly Trottenberg.

"Speed kills and I know it first hand," said parent Amy Cohen. The importance of the cameras this time of year is deeply felt by the family of Sammy Cohen.

"A million students will go back to school tomorrow but there will be one less. My son should be starting 10th grade and he was killed October 8th 2013," said Amy Cohen.

Beyond the number of tickets written and the other traffic statistics there are human tragedies. Officials at the Grace Church School don't want the next to be one of their students out on a very busy 4th Avenue.

"We are so thrilled that this is one of the places that's going to be a slow down," said Head of School George Davison.

"There are over 2500 schools in New York City. We only have 140 cameras. So every kid deserves the life saving devices," said Paul White, executive director of Transportation Alternatives.

So look for the signs. Look for the cameras. "We urge every driver to drive like their child is crossing the street going to school tomorrow," said Cohen.

Cameras are now in place at the maximum amount of locations authorized by the state, 140, with city officials saying that daily violations have dropped by an average of 60 percent.

Starting on Wednesday, there will be 100 fixed camera locations and 40 mobile speed cameras that will be activated in time for the over one million school children heading back to school.

"The NYPD will be giving special attention along with other city agencies for our children returning to school," said NYPD Chief of Transportation Thomas Chan. "Our officers will be focusing on speeding and distracted drivers. Please drive carefully."

Speeding is a leading cause of fatal crashes, city officials say; nearly one in three people killed in New York City traffic is killed by a speeding driver.

According to the DOT, speed cameras are an effective deterrent to speeding and a critical component Vision Zero Initiative. Since the inception of the program and as installation rolled out over the past 20 months, the City has issued over 945,000 speed camera violations, with over 500,000 so far in 2015.

DOT fully installed cameras at the first 20 intersections by the start of school last year and redoubled these efforts over the past 12 months to reach the full complement allowed before the 2015-2016 school year began. As DOT implemented more speed camera locations, daily violations have dropped by an average of 60 percent. In September 2014, there was an average of 192 violations issued per camera, per day. By August 2015, the average daily violations issued by each camera is 69, demonstrating that the program is working to deter speeding motorists.
Related topics:
trafficnew york cityeducationnew york city schoolsschoolspeed limit
Copyright © 2022 WABC-TV. All Rights Reserved.
TOP STORIES
Police release photos of suspected gunman in Q train fatal shooting
Man charged in 'execution-style' murder under Major Deegan Expressway
Teen who drowned in NJ reservoir identified
Something strange is happening with our universe: NASA
15 arrested after NJ pop-up party that sparked 9 p.m. curfew
Taxi drivers rally for raises, per trip increase for customers in NYC
3 people killed in crash near catering hall on Long Island
Show More
AccuWeather: Sun and clouds, breezy and cooler
Weekend storms in NY down trees, leave more than 1,000 in the dark
Mayor declares state of emergency in NYC over baby formula shortage
Arkansas gov: Abortion ban should be revisited if Roe is overturned
Starbucks is leaving Russia for good
More TOP STORIES News