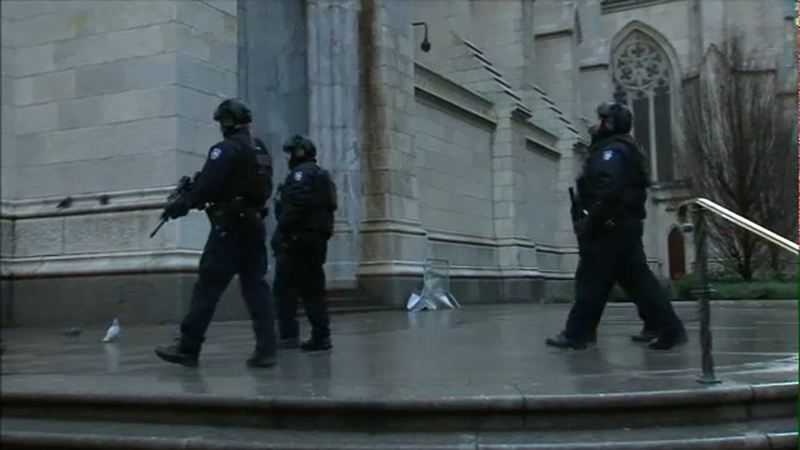 Cardinal Timothy Dolan did not attend as he was sick with the flu, and Bishop John O'Hara from the New York Archdiocese substituted.

While officials stress there are no credible threats in our area, security was tight on Christmas Eve as many gathered for church services and midnight Mass.

The NYPD is employing what they call a full counter terrorism overlay all across Midtown, with officers radiation detectors and bomb sniffing dogs on virtually every corner, mingling with tens of thousands who are celebrating Christmas.

There was both faith and fear outside St. Patrick's Cathedral, with tourists from across the planet celebrating Mass while also concerned about the threat of terror.

"I was going to see the ball drop New Year's Eve, but just to be in that crowd after what has happened in Vegas and then what happened here in New York recently, I said I'm not going to go in that crowd," said Rhonda Mack, of Marietta, California. "But I'm going to do it anyway."

"This is not the New York that I knew as a little girl," said Shelly Stone, of Brooklyn. "I mean, the barricades, it's very sad."

Mahjooba Bianchi speaks Farsi and English, but she doesn't want to raise any suspicion.

"So we're going to avoid talking in our native language, just to make sure," she said. "We're extra cautious. Yeah, we're a little worried. But with extra security, I think everything should be fine."

Many Midtown streets will close during services as another layer of protections as the faithful inside prayed for a quiet holy night. The NYPD says there are no credible threats this holiday weekend, but they're taking extra precautions nonetheless.

Earlier, authorities outlined other measures that will be in place. Major gateways into the city overseen by the MTA or Port Authority of New York and New Jersey will also see heightened security, and any truck or car during the coming holiday weeks is subject to being stopped.
EMBED More News Videos