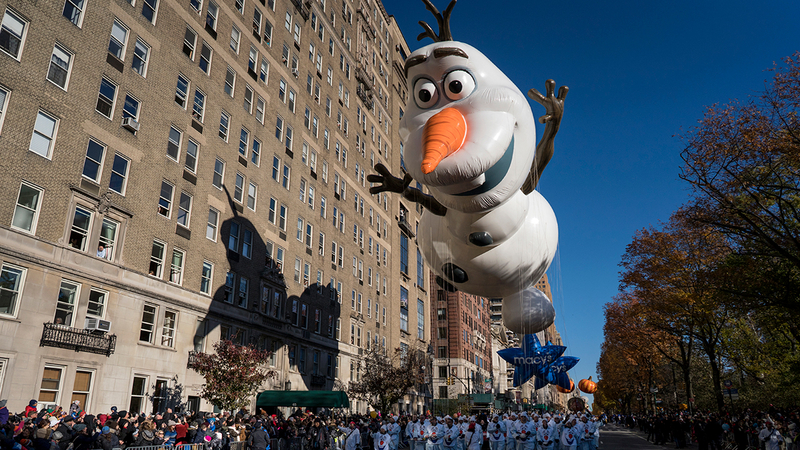 With new faces and old favorites in the lineup, the extravaganza began wending through 2 miles of Manhattan on a chilly morning amid tight security.

Five new floats also made their debut, and there was a special float commemorating the season of togetherness, featuring 125 Macy's employees forming a one-of-a-kind cross generation choir.

PHOTOS FROM THE PARADE


"The crowds are still the same, but there's a lot more police here. That's the age we live in," Paul Seyforth said as he attended the parade he'd watched since the 1950s.

"Not a lot's changed - the balloons, the bands, the floats - and that's the good thing," said Seyforth, 76, who'd flown in from Denver to spend his 50th wedding anniversary in New York and see this year's parade.

The televised parade was proceeding smoothly, though about midway through, a gust of wind on a largely calm day blew a candy-cane balloon into a tree branch, and it popped near the start of the route on Manhattan's Upper West Side. No one was injured.

And of course, Santa Claus was there too!

Jim Dolan is at the balloon inflation site on the Upper West Side.

Timothy McMillian joined his wife, their 9-year-old daughter and his in-laws at 6:30 a.m. to stake out a spot. The relatives had come from Greensboro, North Carolina, to see in person the balloons, marching bands, performers from Broadway hits and elaborate floats they'd watched on TV for years.

McMillian, a 45-year-old schoolteacher, booked a hotel months ago, but he started to have some concerns about security when a truck attack on a bike path near the World Trade Center killed eight people on Halloween.

"With the event being out in the open like this, we were concerned," he said. "But we knew security would be ramped up today, and we have full confidence in the NYPD."

The parade began at 77th Street and Central Park West, and traveled down to Columbus Circle where it turned onto Central Park South. After reaching 6th Avenue it turned south and marched down 6th Avenue/Avenue of the Americas to 34th Street, where it made its final turn towards Macy's Herald Square and ended at 7th Avenue.

There was extra security around the city for the parade and many street closures: