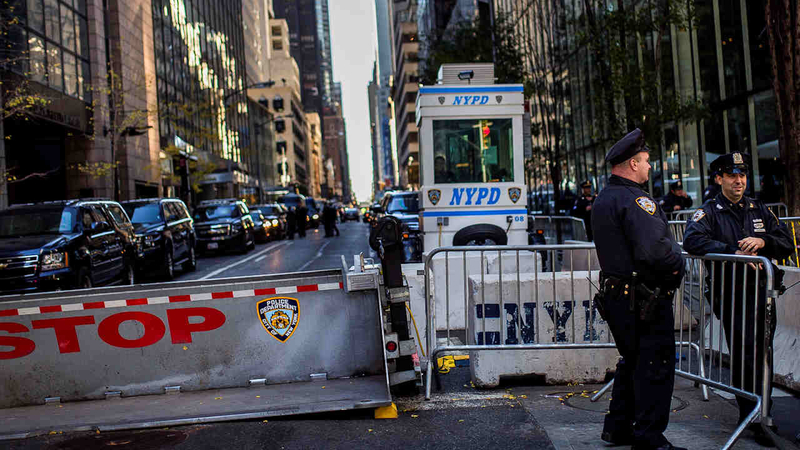 MIDTOWN, Manhattan (WABC) -- New York City, local and federal officials have laid out a plan to address congestion and security around Trump Tower in Midtown, where President-elect Donald Trump lives.

If you stand in the middle of 56th Street and look really carefully you might see tumbleweeds.

The block between Fifth and Sixth is lined with restaurants and, now, growing piles of trash bags. The garbage trucks kept away by security and traffic.

"Not happy at all," said Bobby Ostrozubi, a restaurant manager.

And just try making a living here. Il Tinello managed a decent night. After all, it was Friday, but since the security curtain slammed shut, they say business is off more than 20%.

And with businesses up and down this block on the cusp of what's usually the busiest time of the year with holiday parties and the tourists, they were not thrilled to hear what the mayor had to say.

"If people were to specifically avoid that area to the maximum extent possible that's going to help us to manage the situation as well as we can," Mayor Bill de Blasio said.

The mayor and police commissioner outlined the cold reality of the 65 days between now and inauguration day, when President-elect Donald Trump will be spending most of his time in his gilded tower.

The areas between 53rd and 57th streets, from Madison to Sixth avenues will be a mess. There will be no traffic at all on 56th and reduced lanes on Fifth Avenue. This is all happening at one of the nation's busiest intersections.

"Pedestrian volumes on Fifth Avenue are probably some of the highest in the western world," said Polly Trottenberg, NYC Transportation Commissioner.

The mayor fantasized that Trump will in the end just move to The White House, but no one really knows what his plans are, and this will always be his home.

So back at Il Tinello, Ostrozubi fears the worst.

The NYPD is working with local and federal authorities, including the Secret Service and the New York Department of Transportation, and the mayor says the city does not want to foot the entire bill.

"This is a very substantial undertaking. It will take substantial resources. We will begin the conversation with the federal government shortly about reimbursement for the NYPD for some of the cost we are incurring," Mayor de Blasio said.