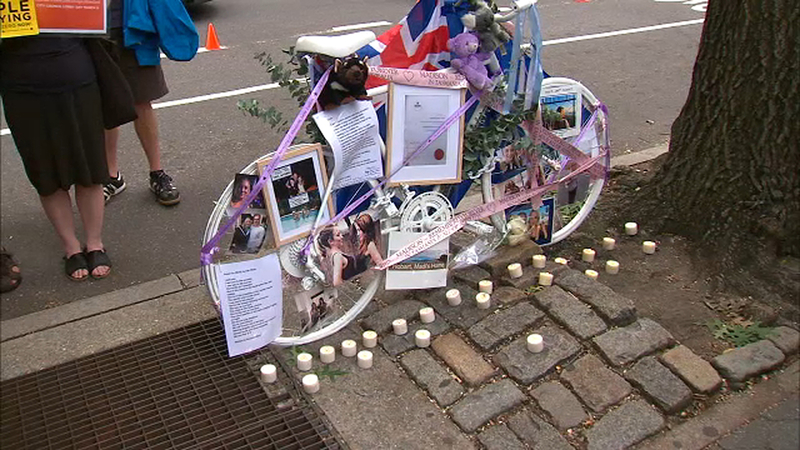 UPPER WEST SIDE, Manhattan (WABC) -- A vigil was held Monday night to pay tribute to a young woman from Australia killed last month while riding in a bike lane across from Central Park.

23-year-old Madison Lyden swerved to avoid a car driving in the bike lane and was hit and killed by a garbage truck.

Those who gathered had a moment of silence, lit candles, then gave a loud Australian cheer, all while a 'ghost' bike was installed in memory of Madison, affectionately known as Maddie.

"Maddie hated injustice so we need to seek justice for Maddie and all the folks we lost before," said family friend Carolyn Bischof.

Officials said a black Toyota livery vehicle pulled out into the bike lane from a stopped position. Lyden then swerved and was struck by a private trash truck traveling northbound on Central Park West.

Police have since charged the truck operator with drunk driving.

"Senseless," said family friend Ellen Rees. "New York is one of the biggest places and it's an amazing city from what we've seen so far. The people are amazing and people should be safe."

Friends decorated Maddie's ghost bike with all things Australian, as well as her recent psychology diploma and photos of her family, her twin sister and the friend she was traveling with in August.

"She was the most bubbly, vibrant person you've ever met," said Bischof. Maddie was supposed to go to Bali after her dream trip to New York City.

Advocates are now pointing to the tragedy to push for safer streets.

"We are here not just to recognize that her life mattered and continues to matter," said Marco Conner of Transportation Alternatives. "We're also here to make sure her death matters."

Safer street advocates are pushing for protected bike lanes, and for the cab driver who triggered the fatal sequence to be held accountable.