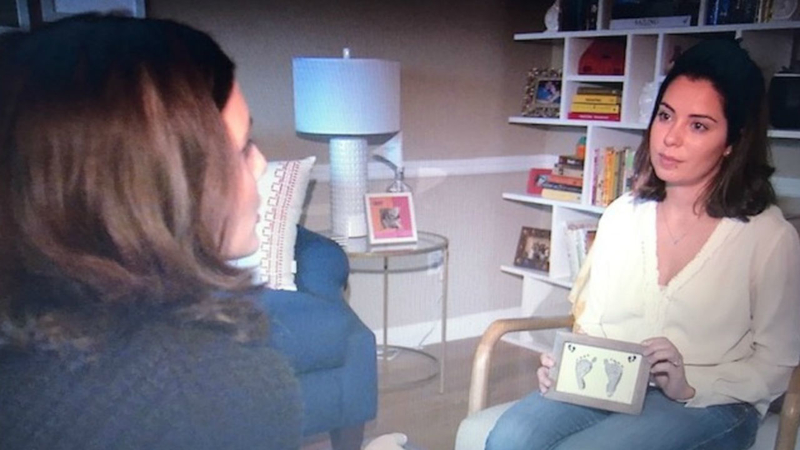 NEW YORK (WABC) -- A new law being considered in New York state would require hospitals and doctors to inform women who miscarry at any gestational age of their right to a fetal burial permit.

As the law stands now, hospitals and attending physicians are only required to inform a woman of the option of having their fetus buried, entombed or cremated if the fetus is 20 weeks or greater.

Eyewitness News reporter Kristin Thorne spoke with Northport resident Nadia Holden, 31, about the new law. In October 2017, when Holden was 32 weeks pregnant, she gave birth to a stillborn, her son Wesley Henderson Holden.

Seven months later, she was pregnant again, but a sonogram at 16 weeks brought devastating news.

"We were told that our baby didn't have a heartbeat, our second child, another boy," she said.

Holden had both her children cremated and their ashes put in urns. She said it's important to have something physical to turn to during the grieving process.

"When you lose a baby, you don't have anything," she said. "It's almost like they didn't exist to the outside world. You don't even get a birth certificate. You know, there's not a lot to remember. So having something physical is very important."

When Holden miscarried her child at 16 weeks, she was aware of her fetal burial options after what she went through with Wesley. She shudders to think about women who may not know their options, so she's glad the new law is being considered.

"It's so hard when you're going through it, and you need some guidance," she said. "And you need to have options and to know clearly what those options are."

Senator James Tedisco, R-Clifton Park, introduced the bill last March to the state Senate Health Committee. A spokesperson for the senator said Tedisco sponsored the bill after meeting with several female constituents who expressed concern over the current state of the law and its exclusion of women who miscarry at 19 weeks or less. The bill is also being sponsored in the state Assembly.

The law would stipulate that the mother must be told orally and in writing about her right to access the fetal death report and to direct either burial, entombment or cremation of the fetal remains. It also amends the current law to state that a fetal death at any gestational age shall be registered within 72 hours after expulsion of the fetus by filing with the commissioner a certificate of such death.

In addition, a report of fetal death shall be reported to the registrar in the district in which the fetal death occurred.

The bill will be reintroduced in January in the Senate Health Committee. Click here to learn more about Senate Bill 7863.