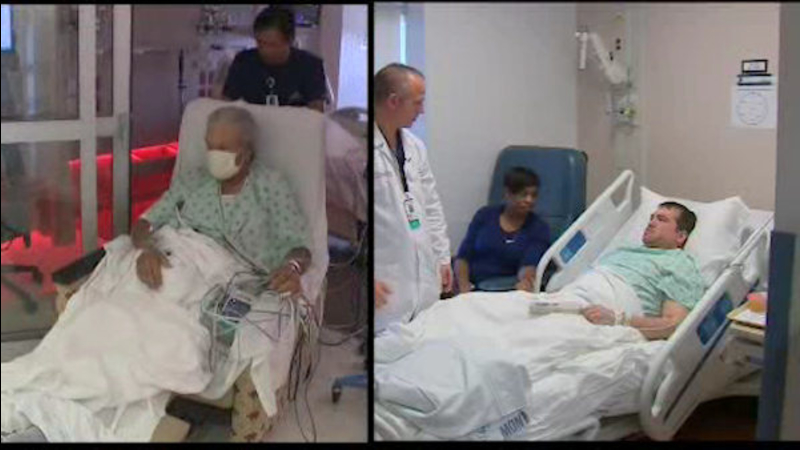 HAMPTON BAYS, N.Y. (WABC) -- Two families have a lot to be thankful for this Thanksgiving.

"Thank you; it's an unbelievable gift," said Keith O'Brien, a kidney recipient.

And for the first time, Keith and his family at Montefiore Medical Center are watching this story, and seeing who gave them that gift.

In Texas, it was a new kidney from 35-year-old Amanda Desoto of San Antonio. Amanda was not a perfect match for her 57-year-old father Jim Kraft.

Keith's brother Eric in New York was not a perfect match for him, but thanks to a national paired exchange program from the United Network for Organ Sharing, both families really do get what they give.

"I wish them well. Maybe someday I'll get to meet them or talk to them and tell them how much we appreciate it," Jim said.

"All right, congratulations, you made it," Keith's doctor said.

It has been a long road for Keith of Hampton Bays. He's now 28, at age 7 he had had strep throat and it led to kidney failure.

His mother first donated a kidney, which eventually failed, and then that led to a lengthy winding trail of medical procedures.

"From second grade until senior year in high school, we did dialysis at home," said Jude O'Brien, Keith's mother.

Then, Keith got another transplant from a deceased donor that lasted 11 years.

Keith's younger brother, Eric, had hoped to give him his kidney but now he feels twice as good about it.

"It's great knowing I helped somebody else live longer, and somehow I was able to help my brother," Eric said.

Right now, there are 100,000 people in the country waiting for kidneys.

10% of those waiting live in New York State.
Because of that high number, the wait right now for a deceased donor is five to seven years.

Of course it wasn't easy flying two kidneys in opposite directions on the busiest travel weekend of the year!

Keith's mother got a picture of the arriving kidney in a frenzy.

"That was just an amazing little interception there. I was just like, 'Stop! That's my son's kidney!'" Jude said.

"My brother means the world to me, so the only thing that really matters is that he's OK," Eric said.

For two families, this is a Thanksgiving to remember.

"You guys are heroes," Keith said.