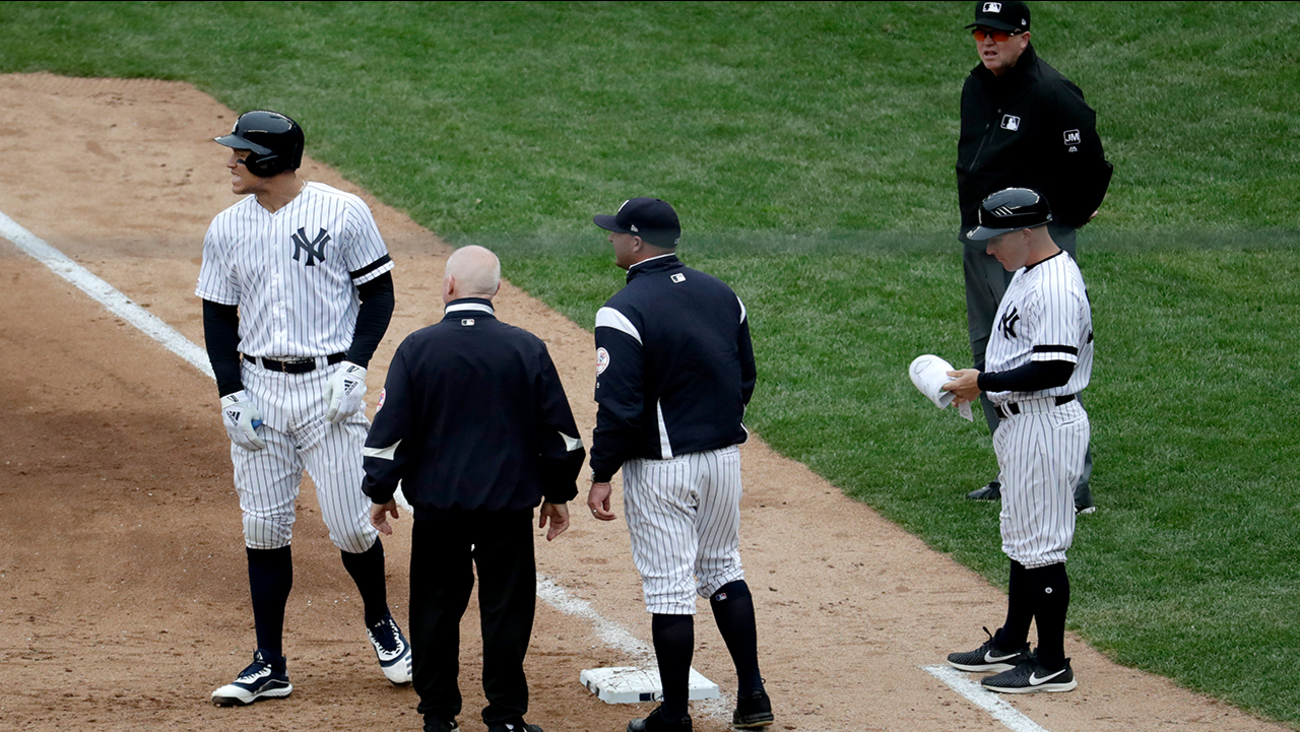 NEW YORK -- Aaron Judge won't be back with the New York Yankees anytime soon, a further blow to an injury-decimated team with a mediocre record 3 weeks into the season.

New York's biggest offensive threat and the heart of its clubhouse went on the injured list for the third time in four seasons Sunday, a day after straining the oblique muscle on the left side of his abdomen while hitting a sixth-inning single against Kansas City.

"Pretty significant strain in there," manager Aaron Boone said. "These next couple of weeks will kind of be a lot of just the healing process, so I think once we get through these first couple of weeks then we'll have a better timeline."

Judge broke his right wrist when hit by a pitch by the Royals' Jakob Junis last July 26 and did not return until Sept. 14. The Yankees were 65-36 when Judge went on the DL, went 25-20 while he was out, then won 10 of their final 16 games en route to a second-place finish in the AL East.

New York's starting lineup for the series finale against the Royals would have pushed the spring training rule requiring four regulars to make the trip for road games, resembling a Broadway show stocked with understudies near the end of a lengthy run.

"You feel like this a great opportunity for us," Boone said. "I feel like it can make the end all that much more sweet."

"The guys that have been pressed into more regular roles than certainly any of us expected at this point have been productive and have been shown to be good players," Boone said.

"And some of our young players that have very bright futures have stepped up and performed at a really high level."

Judge sustained a season-ending right oblique strain while fouling off a pitch against the Los Angeles Dodgers on Sept. 13, 2016.

The Yankees called that a grade 2 strain, but Boone said Sunday there was no grade on this injury: "With obliques, they don't grade; it's not like that."

Infielder Thairo Estrada, the only remaining healthy position player on the 40-man roster, was recalled from Triple-A Scranton/Wilkes-Barre. Estrada, recovered from an early 2018 gunshot wound sustained in Venezuela, has never played in the major leagues, though he was on the bench for an April 4 game at Baltimore.

Sánchez, out since April 10 with a strained left calf, is scheduled to play a rehabilitation game Monday with Class A Charleston and could be activated before Wednesday's game at the Los Angeles Angels. Hicks, Andújar and Tulowitzki were headed to the team's Tampa, Florida, complex on Sunday to continue their rebabs, Hicks felt pain while taking batting practice on March 1, Andújar got hurt March 31 and Tulowitzki on April 3.

Stanton, injured on March 31, will be evaluated in the next few days "and then it could potentially move fast," according to Boone.

Outfielder Jacoby Ellsbury has not played since 2017 because of a variety of ailments.

"I don't view him as being close," Boone said. "He's had different things that have popped up that haven't allowed him to kind of break through and really get to that point to where we start thinking about heavy baseball activities."