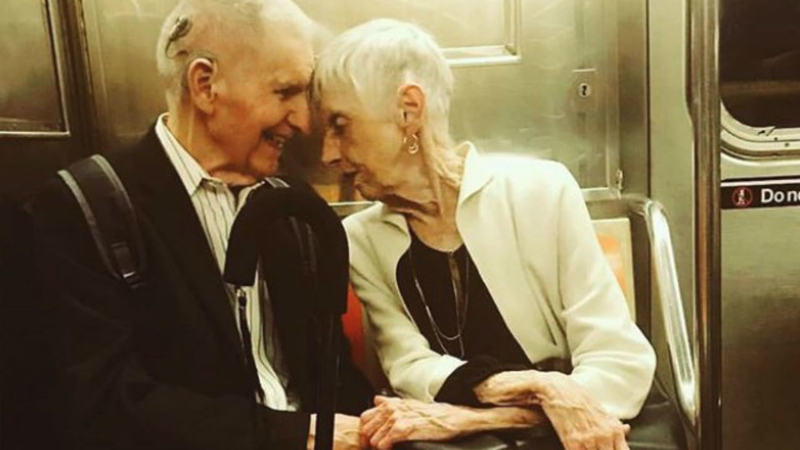 NEW YORK (WABC) -- New Yorkers have come together to help a man track down the couple he randomly captured in a sweet embrace on the subway.

Blake Ricker spotted a loving couple on the 1 train last Tuesday night. He said he could tell they had just gotten back from a date and seemed to be in awe of each other. He decided to snap a picture before he got off the train.

When he got home, he says he took another look and realized how special the photo was and thought it would be a nice thing for the couple to have. That is when he posted the photo to social media and asked for help to identify the couple so he could send them a copy of the photo.

"I can only hope to one day have something as magical as these two seem to have," Ricker wrote in the post.

He said he never meant for the photo to go viral, he just shared it publicly hoping someone might recognize them and they would reach out to him.

It didn't take long for the post to gain traction and the couple's daughter-in-law saw the post. She commented Wednesday morning that her in-laws have been married for 64 years and the photo captures their relationship perfectly.

She said they are determined to live NYC life to its fullest -- including going to dinner, meeting friends, hearing Bernstein's MASS at Lincoln Center and riding the subway.

Apparently the couple was warned not to ride the subway anymore, but Ricker's now-viral photo seems to have busted them.

Ricker said he loves that the photo has gone viral and has touched so many people.

"New York sort of has that, from the outside, has a stigma as hustle and bustle, no time to stop and take the moments in, but it really goes to show you how New Yorkers really come together and they have these moments that are just exceptional," he said.

Ricker has printed out the photo and hopes to give it to the couple in person or send it their way.

He said he hasn't been a New Yorker long, but this photo has allowed him to give back to the city that has already given him so much.