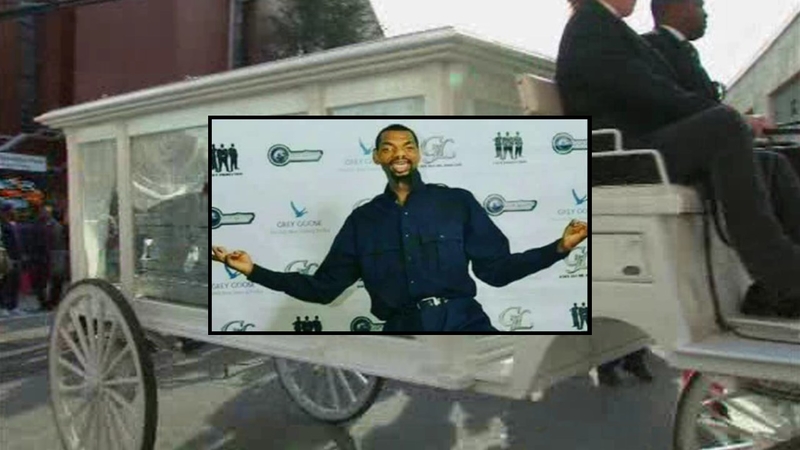 NEWARK, New Jersey (WABC) -- Funeral services were held Monday for a Newark man affectionately known in the community as Uggie, who was fatally shot last week.

Officers found 44-year-old Eric Bowens with a gunshot wound on Bergen Street on November 7, the day before his 45th birthday, on the street where he grew up. A wall of balloons now marks the scene.

"Uggie was to me, he was my friend," one area resident said. "He was Newark, period. I'm emotional right now."

Mourners gathered at the New Hope Baptist Church to pay their respects, chanting his name as a horse-drawn carriage with a glass hearse carried his body to its final resting place.

"It was a beautiful turnout," a woman said. "It shows how much he was loved in this city."


"Regardless of where he went, who he encountered, he showed love," one mourner said. "He never was angry at anyone. You never saw him like that."

Mourners took to social media to express their shock and outrage over his death.


They also appealed for peace as the community reels from his shocking and still unsolved death.

"We greater than this, we're Newark," one man said. "Talk it out, and think about it. Ten minutes later, you'll think it's not even worth it. Because it's not even his life. They're lives are gone too."

They wore "I am Uggie" T-shirts and other clothing honoring the man many took in and helped care for after his mother passed away.

"We gotta kick it up, because you know by now, they should be in jail," one woman said. "Everybody has 'Justice for Uggie' on their page, or 'Demand justice for Uggie.' Hashtag it. Because it's time. We gotta take this to the next level for Uggie."

Authorities are offering a $10,000 reward for information leading to an arrest and conviction in the case.