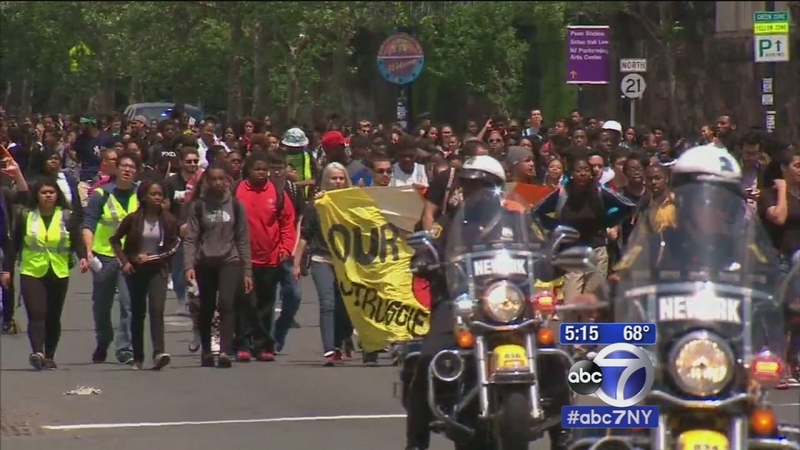 Huge student walkout in Newark over control of schools

NEWARK, N.J. (WABC) -- High school students across the city of Newark walked out of their classrooms Friday in protest of the state's control over the district.

Shortly before noon, about 1,000 students left their schools and gathered at city hall. After a brief demonstration, they then marched to the intersection of Miller Street and McCarter Highway for an old-school sit-in that frustrated a small backlog of commuters trying to get to the New Jersey Turnpike.

One official was very candid, saying if Governor Chris Christie can disrupt traffic to make a political point, well, so can they.

It was just the latest sign of extreme tension in the district surrounding superintendent Cami Anderson and her often-contested plans to reform the struggling system, including the growth of charter schools.

Students said there were protesting against recent budget cuts as well efforts to label even more schools as turnaround campuses. Under that designation, teachers must reapply for their jobs and the school day would be longer.

Newark schools have been under state control for years, and protesters say control belongs back in the hands of local leaders.

The protest did not last too long, with students dispersing around 2 p.m. as traffic got moving again.

Whether the school system can get past its own gridlock is a different story. The mayor released a statement supporting the protests, saying state control has not only not helped, but also has deepened the district's problems.

Two student activist groups -- N.J. Communities United and the Newark Students Union -- are behind the protests.

More than 20 schools currently falling into the turnaround category, and Anderson wants to put nine more on the list.

"Given Cami Anderson's achievement record, we know that this is just another reform attempt to close nine more public schools in the city," said Roberto Cabanas, lead education organizer with Communities United.