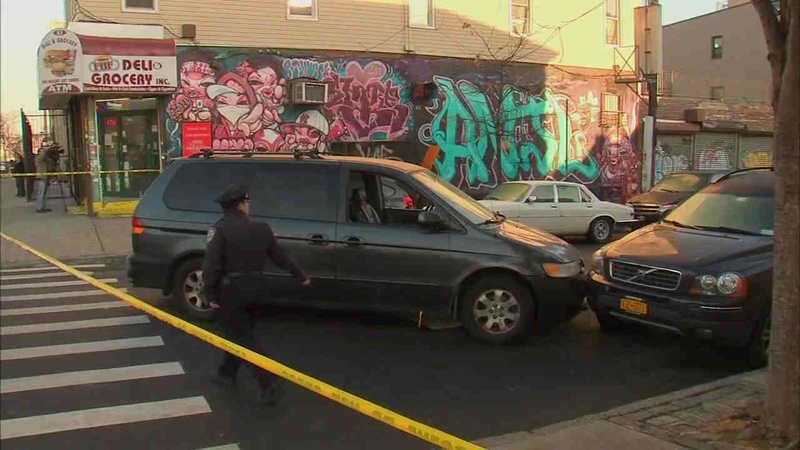 BUSHWICK, Brooklyn (WABC) -- Police are still looking for a suspect after a New York City detective was shot in the left shoulder by his partner Tuesday night during a drug investigation, officials said.

Around 6:15 p.m., near Troutman and Wilson Avenue in Bushwick, a sergeant and a plainclothes detective were attempting to arrest two suspects allegedly making an $80 heroin deal in a car.

Both the sergeant and the detective fired. A total of four shots were fired. The occupants of the car were unarmed.

The detective was shot in his upper left shoulder, apparently in the crossfire of his colleague's bullets. He is listed in stable condition.

"The detective on the passenger side of the vehicle was reaching into the vehicle to make the arrest when the vehicle backed up, and then it moved forward. At that moment, the sergeant who was standing on the driver's side of the vehicle and the detective where he was, they fired their weapons, and so that's what I mean by crossfire," said First Deputy Commissioner Ben Tucker, New York City Police Department.

In Bushwick Wednesday, police towed the suspects' minivan after crime scene investigators spent the entire night gathering evidence. But police officials say there is now no doubt that the detective was struck by a bullet from his partner's gun.

Police have two suspects in custody, but one remains on the loose. Police said that he was taking part in the drug transaction, and ran away when police attempted to make the arrests. A police bloodhound followed his trail for several blocks right into the Wyckoff Avenue L train stop.

"Heroin is an issue everywhere in the city, not only in the city but outside as well. So we're specifically targeting 'these' locations. Ironically, the brand name of the heroin is 'American Dream,'" said Chief of Detectives Robert Boyce, NYPD.

One suspect, a 45-year-old man, was also shot in his leg and wrist. He was taken to Bellevue Hospital in stable condition. He has 58 prior arrests. The other suspect in custody is 51-years-old and has 17 prior arrests.

A massive motorcade rushed the detective to Elmhurst Hospital, where doctors, assisted by the NYPD's chief surgeon, treated him. Both the detective and the sergeant have 11 years on the job.

"I heard a car crash and when I looked I saw a cop with a gun," a witness said.

"And all you heard was the cop screaming, 'I shot him, I shot him,'" another witness said.

As police widened the search to look for the third suspect, neighborhood residents breathed a sigh of relief the detective's injury wasn't more serious.

"God bless the cop and anyone else who got hurt," a resident said.

Mayor Bill de Blasio released a statement saying, "Tonight's shooting is an important reminder of the critical and dangerous work our police department does each day. Today, a detective put his life on the line as he bravely performed his duty to protect our city and its residents from harm. The team of police officers involved in tonight's incident represents the best of the NYPD, and I want to thank them on behalf of our city for their actions tonight. We're grateful the detective is doing well, and we wish him a safe and swift recovery."

The shooting marks the sixth time since January a New York City police officer has been shot in the line of duty.

The officers and suspects have not been identified.