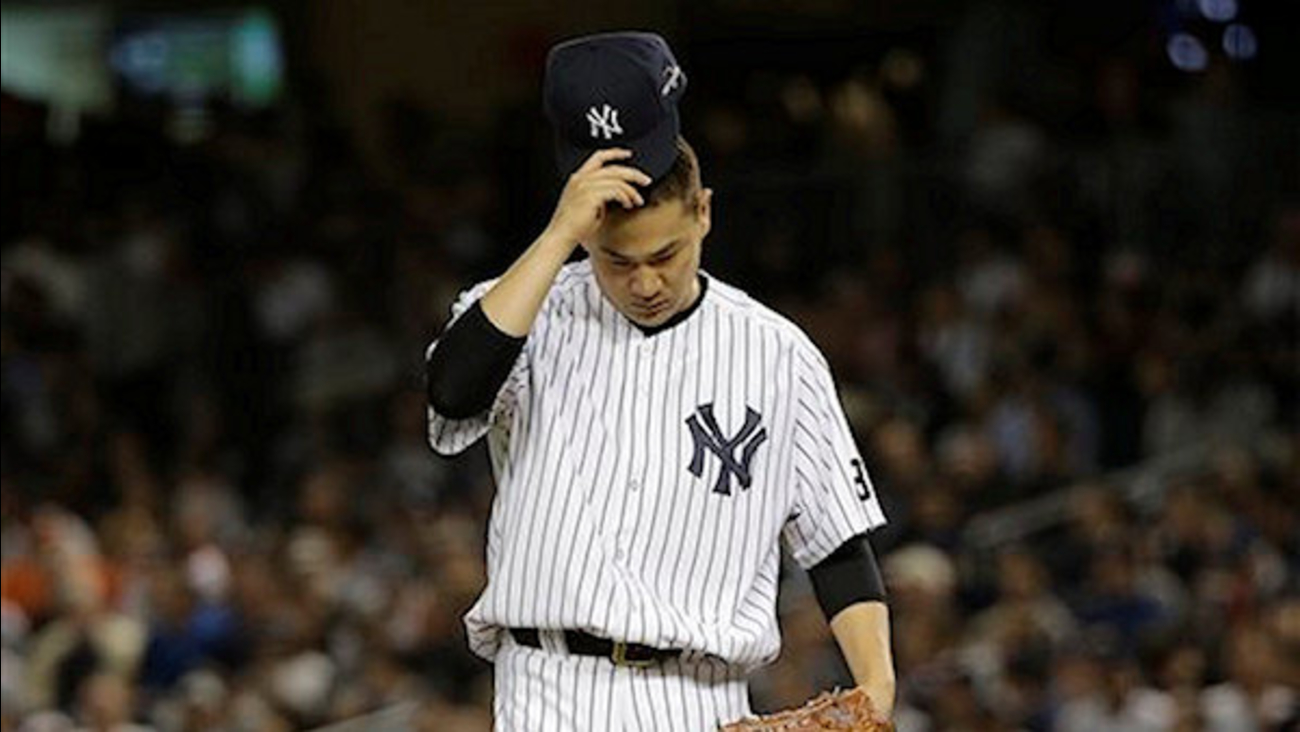 The Yankees still have not led in a postseason game since Derek Jeter sprawled in the dirt three years ago, screaming in pain from a broken ankle.

A season-ending 3-0 loss to the Houston Astros in the winner-take-all AL wild-card game on Tuesday night should not have been a surprise. The 2015 Yankees overachieved just by reaching the postseason.

"We had to fight really hard to get to this spot, and so, yeah, I am pleased," Yankees manager Joe Girardi said before the game. "This club accomplished a lot more than people thought we would."

Girardi started two rookies in his infield during what turned out to be the Yankees' fifth straight postseason loss: first baseman Greg Bird and second baseman Rob Refsynder, who combined for exactly 200 career at-bats coming in.

"When we left spring training, it wasn't what I expected," Girardi said.

Following Jeter's retirement last fall, the Yankees arrived at spring training with uncertainty, fought through a summer of anxiety and injury and ended their season in misery, a great distance from their first World Series title since 2009.

On a night when Yankee Stadium had the red-white-and-blue bunting out for its loudest crowd this season, New York managed just three singles in six innings against Dallas Keuchel, who looked like a bearded lumberjack cutting down the Yankees' offense. The Yankees didn't get any hits off the Astros' bullpen.

Masahiro Tanaka allowed five hits in five innings, but he gave up solo homers to Colby Rasmus and Carlos Gomez.

Coming off six straight losing seasons, Houston had more spark and spunk in its first postseason appearance since 2005. By the eighth inning, fans in the crowd of 50,113 started booing the home team's lacking batters.

New York reached the playoffs after a rare two-year absence, but in some ways the deforestation of the last great era Yankees' progresses without pause. Among the players swept by Detroit in the 2012 AL Championship Series, only two appeared against the Astros: centerfielder Brett Gardner and designated hitter Alex Rodriguez. Mark Teixeira hobbled onto the field with crutches for the pregame introductions, unable to play since he fouled a pitch off his right shin on Aug, 17.

Instead of being available out of the bullpen, former ace CC Sabathia checked into an alcohol rehabilitation clinic Monday.

Brought in last year at a cost of $153 million as part of the renovation, centerfielder Jacoby Ellsbury was dropped from the starting lineup following a second-half slump. Gardner, kept in at Ellsbury's expense, struck out three times against Keuchel.

Rodriguez, who revived in the first half following his one-year drug suspension, seemed like he was zapped by Kryptonite around the time of his 40th birthday in late July.

Yet, there is reason for hope. Didi Gregorius established himself as Jeter's successor at shortstop, getting better each month at the plate and in the field. Luis Severino, a 21-year-old right-hander, joined the rotation in August and showed promise, as did Bird and Refsnyder.

New York's most conspicuous flaw is its starting rotation: Tanaka, Sabathia, Michael Pineda, Nathan Eovaldi and Ivan Nova all ailed at times. Yankees starters averaged 5.72 innings per outing, according to STATS, 21st among the 30 major league teams and a reason relievers Dellin Betances and Justin Wilson deteriorated during the second half.

David Price, who has helped led Toronto into the playoffs for the first time since 1993, is eligible for free agency and would slot in at the top of the rotation. But the left-hander is 30 and would come at the high price of a nine-figure contract that likely will lock the Yankees into his declining years. Zack Greinke, Jordan Zimmermann and Johnny Cueto also are on the high-cost, quick-fix free-agent market.

New York could have had Keuchel, taken by Houston with the 221st pick on the seventh round of the '09 amateur draft. Among the players the Yankees chose ahead of him were pitchers Adam Warren and Caleb Cotham; catcher John Ryan Murphy; outfielder Slade Heatchott; and infielder Robert Lylerly, who never made it above Double-A and retired after the 2012 season.

In an era where revenue sharing and regional sports networks have led to greater parity, the Yankees have shown signs of change. Choosing to acquire an extra draft pick rather than part with one, they allowed closer David Robertson to leave last offseason and signed Andrew Miller.

Change rarely occurs quickly in baseball, and rebuilding while maintaining a winning record is especially tricky. There are more touted prospects in the farm system now than during the previous dozen years, but the next title still seems a ways away.