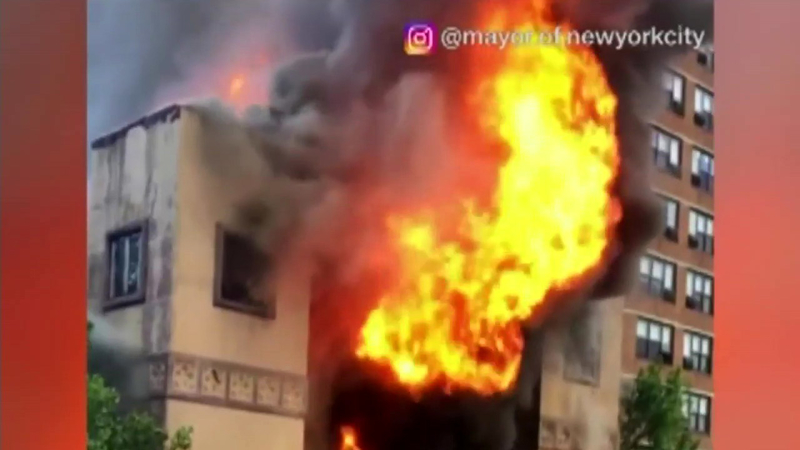 LOWER EAST SIDE, Manhattan (WABC) -- A 14-year-old boy has been arrested in connection with a fire at a Lower East Side synagogue Sunday night.

The boy was charged with third-degree arson as a juvenile. He appeared in family court Wednesday.

"We do think it's arson. We think it's a purposeful fire," said Robert Boyce, NYPD chief of detectives.

Surveillance video recovered from a nearby camera showed three young people running from the general area.

Detectives have names of two friends of the teen who was charged, spotted on the video fleeing the scene. Police said they are seeking to question them also.

"We have a 14-year-old in custody," said NYPD Commissioner James O'Neill. "There were some other children with the 14-year-old. They are witnesses right now. It doesn't appear to be bias-related."

More than 100 firefighters battled the three-alarm blaze Sunday evening at the abandoned Beth Hamedrash Hagodol on 64 Norfolk St. Flames broke out around 7 p.m. and were brought under control about three hours later.

"All of a sudden a big ball of fire came out the window," said Mike Cromin, who lives across the street and watched as the fire started.

In recent years he says the vacant building was inhabited by the homeless and kids. Now it's gone.

"They got to tear it down. I hope they could rebuild it, put a new one up but that's for the future to tell," said Cromin.

Although the fire occurred in what was once a house of worship, it was not investigated as a bias crime.

Investigators are aware of previous reports of youths going in and out of the 167-year-old house of worship, which has been vacant for the past decade.

The synagogue is in ruins and is being demolished, with fencing put up all around to make the area safe.

The Gothic structure was originally built in 1850 as a Baptist church. It later served as synagogue for the Beth Hamedrash Hagodol Orthodox Jewish congregation for over 120 years. The synagogue was closed in 2007.