2 dead after fire burns through apartment building in Williamsburg

The blaze burned through all three floors and through the roof of the Richardson Street building in Williamsburg just after 1:30 a.m.

The fire spread through that building and an older tenement building behind it.

One man dead and another missing in a #Brooklyn fire. #RichardsonStreet #abc7ny pic.twitter.com/tKuGaQzUM8

The body of a woman was found in a second floor bedroom, while firefighters later located the body of a man in the basement.

Their identities have not yet been released, and the fire does not appear suspicious at this time.

One firefighter sustained a minor injury, and about 10 residents were displaced. 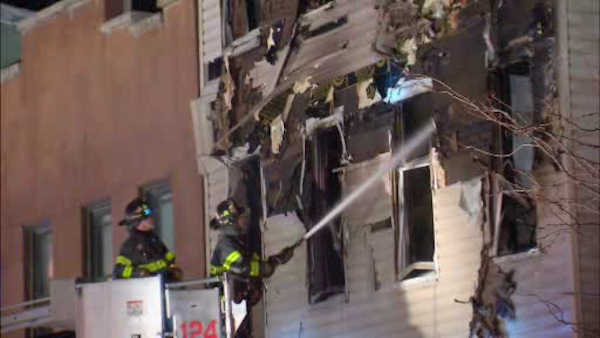 PHOTOS: Fatal fire in Williamsburg
A five-alarm fire tore through an apartment building in Williamsburg, Brooklyn early Monday.
One man made his way outside with just the clothes on his back.

"If I even knew it was going to be like this, I would have grabbed my cell phone and all," Scott Darragh said. "I didn't expect nothing to be like this. I'm safe, and I can't find my two partners, I don't know where they are."

Teresa Vibberts lost the home it took her six years to build.

"The first thing I heard was the glass shattering," she said. "I was asleep with earplugs and a sound machine, it took a lot to wake me up. My first thought there was an intruder, and through my eye mask I saw the flames. I had nothing but the shirt I was sleeping in, no shoes, no phone and we ran out. We ducked down under the smoke and watched our homes burn."

It took about 200 firefighters around three hours to get control of the blaze, near McCarren Park.

The cause of the fire is under investigation, with some residents reporting hearing an explosion.

The arson squad believes the fire started on the first floor.