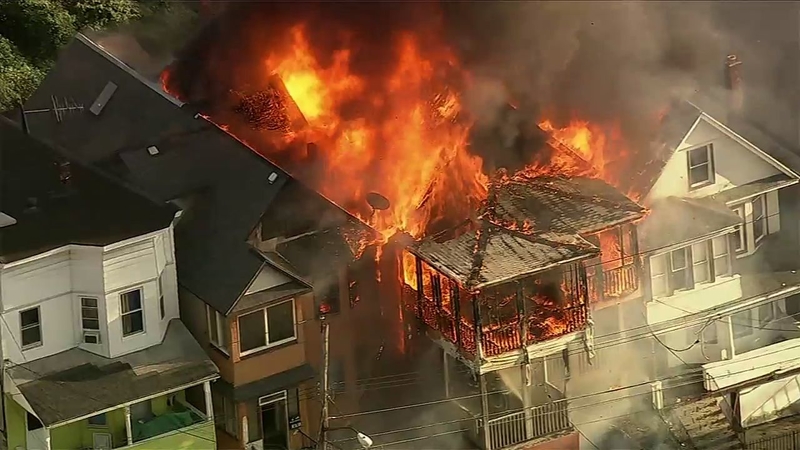 ST. GEORGE, Staten Island (WABC) -- Firefighters were putting out hot spots into the night on Thursday at a six-alarm fire that destroyed seven homes in St. George, Staten Island.

A house on Benzinger Avenue caught fire just after 6 p.m. and quickly spread to the neighboring homes on both sides.

With flames devouring her home, a woman ran to safety just as the fire department arrived. Some 250 firefighters responded to the fire.

Before long, the FDNY was on the move, charging into the buildings as power cables above them arced from the racing fire.

As the flames leapt from one wooden home to the next, it seemed a miracle that the fire didn't spread even further, before firefighters were forced to get out as two of the buildings were collapsing.

"It was really hot and scary," said Jonathan, a resident.

Jonathan took cell phone video after he helped an elderly woman in his building get down the stairs and out to safety.

Two people were hurt, 1 seriously. 19 firefighters were also injured and said to be suffering from heat exhaustion.

All of the injured were taken to Richmond University Medical Center.

The FDNY says that there was extreme radiant heat in the street, it was strong it melted the siding on buildings across the street.

For much of the night, the smoke even on the street was so thick you could barely see the firemen working above.

Safe from the flames, families comforted one another outside, and many of them have young children.