WABC
NEW YORK (WABC) --
During Hispanic Heritage Month, ABC7 is sharing information about local events, along with the history, recipes, and customs of the Hispanic community. Take a look at events happening around our area this month! 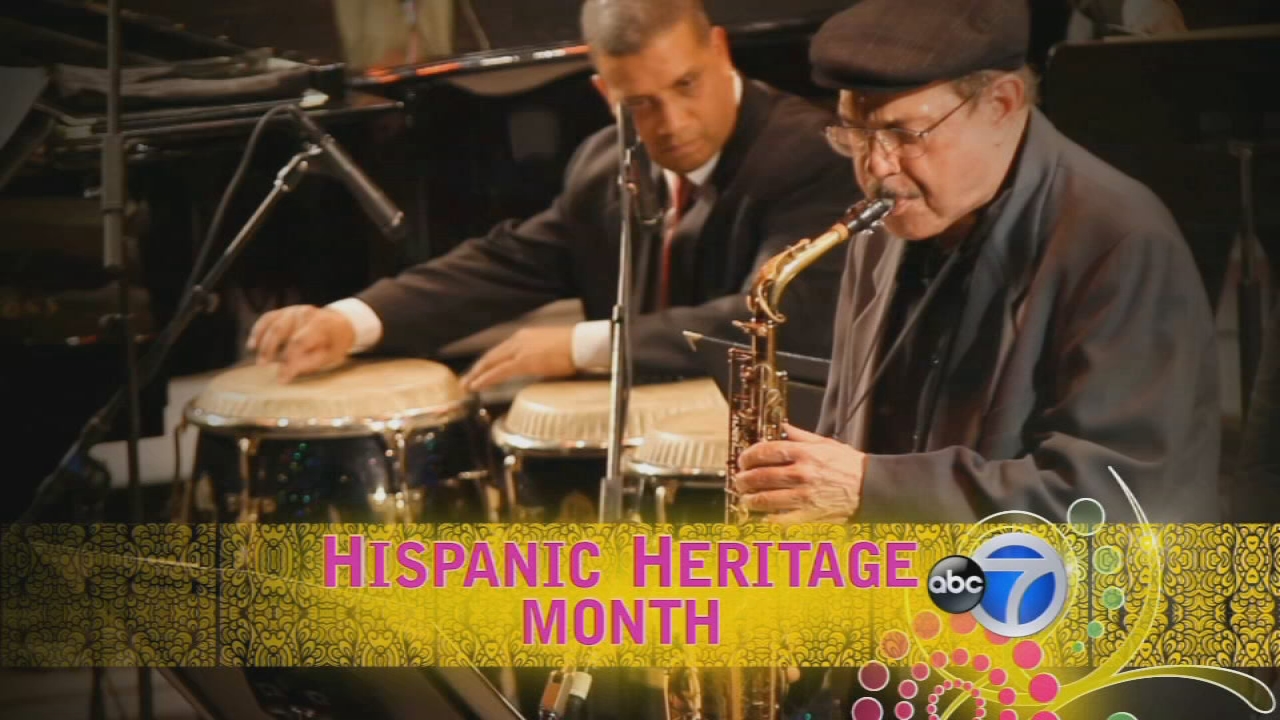 Hispanic Heritage Month
Find out more and connect with events and resources!

Dutchess Community College Hispanic Heritage Month Celebration
Events Including:
A celebration of the life and work of Gabriel Garca Mrquez, 1927-1914, Colombian author and recipient of the 1982 Nobel Prize in Literature.

Tuesday, September 16, 12:30-1:45 p.m.
Ritz Lounge, Dutchess Hall
Come celebrate Hispanic Heritage Month by participating in a fandango, which is a cultural event, a kind of party and musical jam session rolled into one. The music performed and danced to is known as Son Jarocho, a regional folk musical style from the Mexican state of Veracruz, located along the Gulf of Mexico. It represents a fusion of indigenous, Spanish and African musical elements, reflecting the population that evolved in the region from Spanish colonial times. Son Jarocho often is played only on jaranas, a small guitar-like instrument, and sung in a style in which several singers exchange improvised verses called dcimas, often with romantic or humorous content. The most widely known son jarocho is "La Bamba." At the fandango guests will have the opportunity to learn a few chords on the jarana and some dance steps.

Friday, September 19, 12:00-12:50 pm
Bowne Hall, Room 122
Emily Williamson is a Ph.D. Candidate in Ethnomusicology at the Graduate Center, City University of New York. New York City is a city of immigrants and is possibly the quintessential example of how a city is enriched by its immigration history. In recent decades, Mexican immigrants have become the fastest growing immigrant group in New York. Yet, there is still little research on the lives of this expanding group. In her research, Williamson examines the ways Mexican communities have integrated music into their daily lives in New York. This lecture more specifically, addresses how musical practices reveal the diversity of the various Mexican communities, groups and individuals.

Newburgh Hispanic Festival
September 14, 2014
Front St, Newburgh, NY 12550
"Come join us as we celebrate the many Latino cultures that represent the Hudson Valley. The City of Newburgh & R&M Promotions have teamed up to organize one of the BEST Hispanic events for 2014. Salsa, Merengue, Bachata, Cumbia and Mariachi music will fill the air along the Hudson River next to Gully's."
Source: http://now-events.net/us/page/2670764

Hispanic Heritage Month Kick-off Celebration
Monday, September 15, 2014 from 11:30 AM to 12:50 PM NEWARK, NJ
"Rutgers Marketing & Management Society will be tabling at the Hispanic Heritage Kickoff event. Come get familiar with us if you aren't already, hang out or just say hi, and learn more about Hispanic Heritage with us!"

2014 #NYCLP Latino Heritage Month Happy Hour
Thursday, September 18, 2014 from 6:00 PM to 10:30 PM
"Join the NYC Latino Professionals Meetup for a networking happy hour in celebration of Latino Heritage Month at Pranna in the Flat Iron district. Pranna is a trendy Pan Asian restaurant and lounge, with a chic and vibrant dcor.
Our event will take place from 6-10:30pm in the private Cellar Bar. The Cellar Bar is a lounge within a lounge. This lower-level space features modern flat screen TVs and sexy amber-colored glass lanterns alongside cabana-like banquettes. There will be happy hour specials until 8pm and a food menu will be available. Event format is networking from 6-8pm; networking & Latin dancing from 8-10:30 pm."

2nd Annual PUEBLO HARLEM Hispanic Heritage Month Celebration
www.afrolatinjazz.org & www.HSAnyc.org
September 20, 2014 from 11am to 7pm
Herb Alpert Center, 645 St. Nicholas Avenue
Free Event : "Harlem, New York -- In celebration of Hispanic Heritage Month (Sept 15-Oct.15) the Afro Latin Jazz Alliance and Harlem School of the Arts invite the community in Harlem and beyond to join us in this event that highlights the history and diversity of Harlem through a day of music, folkloric and popular dance, food and art. Filling out the day will be a variety of food and craft vendors. Designed for children and their families, jazz aficionados and community members, PUEBLO HARLEM celebrates Hispanic heritage and Harlem's mix of cultures. With a performance by the Fat Afro Latin Jazz Cats, the Alliance's premiere Latin Jazz youth orchestra, the day closes with a dance party featuring our leading Latin Big Band, GRAMMY Award winners Arturo O'Farrill and the Afro Latin Jazz Orchestra."

Yankees Proudly Celebrate Hispanic Heritage Month
Friday, September 20th and Saturday, September 21st
The New York Yankees will welcome individuals from two noteworthy institutions, the Latino Baseball Hall of Fame and the Hispanic Heritage Baseball Museum Hall of Fame, and recognize them in special on-field ceremonies. The Yankees have also published the second edition of Yankees Magazine En Espanol, the Spanish-language issue of the club's flagship publication.
Former Yankee Felipe Rojas Alou, Latino Baseball Hall of Fame Class of 2010, will be on hand at Yankee Stadium on Friday, September 20, for a pregame ceremony to recognize a few of the newly-elected members of the 2014 class, which include Bert Campaneris, Omar Moreno, Osvaldo Virgil and Moises Alou. On Saturday, September 21, the Hispanic Heritage Baseball Museum Hall of Fame will also have a pregame ceremony announcing the induction of former Yankees pitcher, Vernon "Lefty" Gomez. Members of the Gomez family will be on hand, including Lefty's daughter, Vernona Gomez.

Mexican Day Parade
September 21, 2014
Madison Avenue between 26th and 39th Street.
"The Mexican Day Parade of New York commemorates Mexico Independence that started with the Grito de Dolores on September 16, 1810. It includes folklore, culture, music, customs and the use of many vibrant colors to get the attention of the people. Entertainment stars, local and Mexican politicians, music bands and mariachi groups, have attended this parade. This parade has it all. The General Consulate of Mexico in New York has always helped this parade."
Previous Sponsors: Telemundo, Univision, NY Daily News, El Especialito, Latin Trends, 93.1 Amor, and more
Source: http://mexicandayparadeny.org/214-2/

The Carnaval De La Cultura Latina
Sunday, September 21st, 2014 from 12pm to 6 pm
Junction Boulevard from Roosevelt Avenue to 37th Avenue, Jackson Heights Queens
"This event is fun for the entire family and great venue to promote your company products or services so make sure to contact us early to take advantage of early promotions and make arrangements in having your company take part in one of the most important outdoor events in Queens County and the City of New York."

Long Island Hispanic Heritage Street Fair
Sunday, September 28, 2014 from 11 AM to 5:00 PM
La Fuerza Unida Inc - Between Bridge Street and Glen Street, Glen Cove - 11542
A free event "To celebrate the Hispanic community in Glen Cove, this event is just not for Hispanic people this event is for everyone who wants to get together and enjoy a fun and exciting street fair with rides, games, prizes, food, music by mambo loco and dancing and singing."

Hispanic Heritage Month Business Forum
September 30, 2014 8:30am to 12:30pm
Federal Plaza Conference Center, 26 Federal Plaza, 6th Floor, New York, NY 10278
"How SBA Can Help You Start and Grow Your Business?
Government Contracts: Certification and Marketing"
"All SBA programs and cosponsored programs are extended to the public on a nondiscriminatory basis. Reasonable arrangements for persons with disabilities will be made, if requested at least 2 weeks in advance, by contacting Man-Li.Lin@sba.gov."

Museo Del Barrio
Events Including:
September 3 - October 11
"During 2014 -2015, artists of Latin@ or Caribbean descent living in New York City's five boroughs are offered a studio located within El Museo del Barrio's exhibition space. Selected participants, one per session, are invited to generate a new body of work in the midst of what is customarily understood by El Museo and its visitors as an area allocated for the installation of finished pieces."

September 17 @ 6:30 pm - 8:30 pm
"Join us for a conversation about the role of biennials in a growing list of alternative locations, and how they affect the global map of international biennials with five international curators: Roco Aranda-Alvarado, Curator, El Museo del Barrio; Julia Herzberg, Curator and Art Historian; Emiliano Valds, Associate Curator, Gwangju Biennial, and Chief Curator of the Museo de Arte Moderno de Medellin (London/Medellin); and Isabella Villanueva, Assistant Curator, Americas Society.
Program is presented as a part of a 2-day workshop at the Guggenheim and El Museo for young curators proposing projects for the Bienal de las Fronteras. Conceived as a public and participatory platform focusing on the most up-to-date and emerging concepts and expressions of the visual arts, the Biennial of the Frontiers seeks to become a space in which creation, analysis and dissemination of contemporary art explores the established frontiers of art practices in Mexico and abroad.
With the goals of promoting the creation of artworks and curatorial projects in Mexico and abroad, the Biennial of the Frontiers is building a platform for emerging artists and curators. Fostering the production of creative and innovative proposals in the field of visual arts, this Biennial intends to facilitate the dialogue, exchange and critical discussion of artistic practices today. For more information, visit www.bienaldelasfronteras.org/en/.
Immediately prior to the discussion at 6:00pm, we will host a special guided tour of PLAYING WITH FIRE: Political Interventions, Dissident Acts, and Mischievous Actions with guest curator Nicolas Dumit Estevez."

September 18 and October 15 @ 3:00 pm - 5:00 pm
CALLING ALL ARTISTS! Throughout the year, El Museo de Barrio's curatorial team invites artists of Caribbean or Latin American descent to register for one-on-one 20 minute portfolio reviews with our curatorial department and special guests. OVER THE TABLE, a part of the Office Hours project, offers art practitioners in different stages of their development the opportunity to engage in one-on-one discussions about their work or an upcoming project.
ABOUT OFFICE HOURS (OH)
OH is comprised of a series of actions spread throughout El Museo del Barrio's facilities for which multi-disciplinary artist Nicolas Dumit Estvez invites the various departments of El Museo to operate at a horizontal level with its own exhibition space. OH conceives El Museo and the museum as a holistic work of art; that is, a living artwork existing beyond the boundaries of the exhibition space and co-mingling with life. OH (Office Hours) 2013 Nicols Dumit Estvez
GUIDELINES
- Open to artists of Puerto Rican, Latin@, Latin American, or Caribbean descent living in the greater NYC metropolitan area.
- Bring images of your work (in whatever format you choose) and the equipment that you will need to present it properly. Free Wi-Fi is available in El Museo's Caf.
- You must be at El Caf five minutes before the time allocated for your meeting and expect to be at El Museo for up to an hour. Late arrivals may not be seen.

September 20 @ 12:00 pm - 5:00 pm
"SUPER SBADO is back and we're welcoming the changing seasons! Join us for a fun-filled family day of art making, storytelling, dancing, and more."

ARTEXPLORERS FAMILY CORNER
12:00pm - 3:00pm, Lobby
Stop by and pick up fun activity cards to help you during your visit.

Storytelling / Cuentos
COLORIN COLORADO...Flor Bromley
12:00pm & 2:00pm, El Caf
Celebrate the season with actress and singer Flor Bromley, as she shares stories and music from The Three Sisters and The Goose Who Tried to Keep the Summer.

October 9 @ 6:30 pm - 8:00 pm
"Explore the life and work of Marisol Escobar, the curator of MARISOL: Sculptures and Works on Paper, Marina Pacini, Chief Curator at the Memphis Brooks Museum of Art, and Catherine Morris, Sackler Family Curator for the Elizabeth A. Sackler Center for Feminist Art, at the Brooklyn Museum.
Guests will discuss the artist's perception of popular culture, in the context of feminist art, and provide insight on women artists working during this period."
http://www.elmuseo.org/event/ss-celebrate-fall-2014/