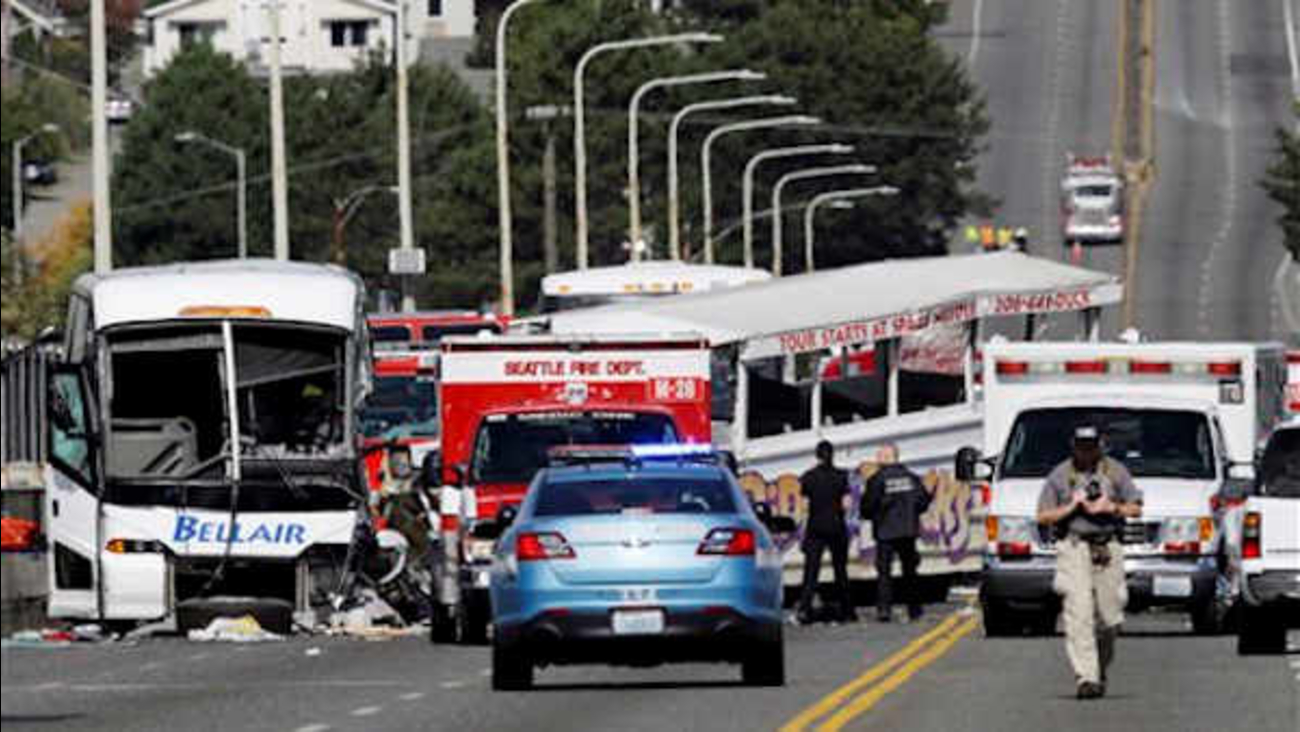 SEATTLE -- An amphibious tour vehicle and a charter bus carrying foreign college students collided on a busy Seattle bridge Thursday, killing four people and sending dozens to hospitals in a wreck that scattered crumpled metal and broken glass on the road.

Mayor Ed Murray said foreign students were on the charter bus, and efforts were being made to contact consulates. He had no other details.

Witnesses described hearing a loud screech before the wreck and then seeing injured people either lying on the pavement or wandering around in a daze.

Jahna Dyer, a registered nurse, said she was walking across the Aurora Avenue bridge when she came upon the scene, a mess of jumbled metal and glass.

Some victims were lying on the road, while others milled about seemingly in shock and falling down, she said.

Dyer jumped a railing separating the sidewalk from the roadway and helped stabilize an injured man's neck. She said she also helped a woman who had a cut lip and glass in her eye.

"She was holding my hand and saying thank you," she said.

John Mundell said he was at the south end of the bridge when the crash occurred.

"We could hear the screech and twisted metal. It was surreal," he said, adding he saw what appeared to be a few dozen people on the ground. "I wanted to try to help. I felt helpless."

One of the vehicles involved was an amphibious, military-style bus operated by a tour company called "Ride the Ducks." The tours are known for exuberant drivers and guides who play loud music and quack through megaphones as they lead tourists around the city.

"When (firefighters) arrived a lot of people were running at them, obviously saying people needed help," Stangl.

Northwest Hospital spokeswoman Karen Peck said her facility is one of at least six Seattle hospitals receiving patients. Three of the 15 patients being treated at Northwest were from one family, she said - men ages 60, 20 and 24.

Harborview Medical Center planned to treat up to 10 of the most seriously injured, spokeswoman Susan Gregg said.

The bridge was expected to be closed for hours as authorities investigated and cleared the wreckage, Stangl said.

The Aurora Avenue bridge carries Washington Highway 99, one of Seattle's two primary north-south arterials, over Lake Union. It has three lanes in each direction and no barrier separating the north and southbound lanes.

While there was no immediate word about the cause of the crash, some noted the safety of the amphibious boats has been questioned before. Lawyer Steve Bulzomi represented a motorcyclist who was run over and dragged by a Ride the Ducks boat that came up behind him at a stoplight in downtown Seattle in 2011.

"These are military craft that were never designed to navigate narrow city streets," Bulzomi said Thursday. "This is a business model that requires the driver to be a driver, tour guide and entertainer at the same time. It asks too much of the driver."

In 2010, a barge plowed into an amphibious vessel packed with tourists that had stalled in the Delaware River in Philadelphia.

The crash sent all 37 people on the duck boat into the river, but 16-year-old Dora Schwendtner and 20-year-old Szabolcs Prem never resurfaced. The Hungarians were visiting the United States through a church exchange program; their families filed wrongful-death lawsuits.

A tug operator, Matt Devlin, eventually pleaded guilty to involuntary manslaughter in the crash. Devlin acknowledged the accident was caused largely by his continuous use of a cellphone and laptop computer while he was steering the barge.

In July, the family of a woman struck and killed by an amphibious tourist boat in Philadelphia filed a wrongful-death lawsuit.

Attorneys for Elizabeth Karnicki's family allege the May 8 accident, which occurred during rush hour, was due in part to "huge blind spots" on the Ride The Ducks vehicle.