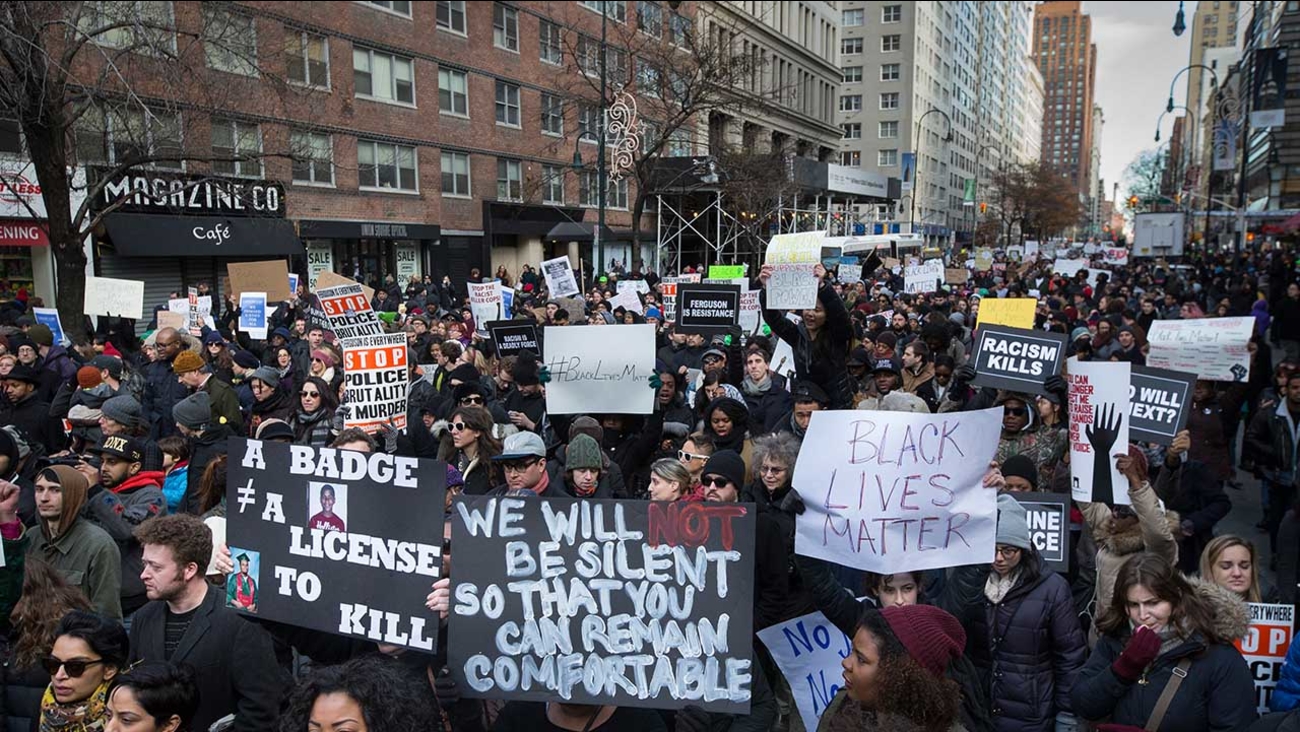 December 13, 2014: Protests erupt after announcement is made not to indict NYPD officers for chokehold death of Eric Garner. (AP)

NEW YORK -- Civil liberties lawyers urged a state judge on Thursday to reveal secret grand jury testimony concerning the police chokehold death of an unarmed man, saying the public needs to reconcile a video of the arrest with the decision not to indict the officer involved.

Eisenberg and other lawyers were questioned sharply by Judge William Garnett about the legal reasoning that would justify revealing secret proceedings stemming from the death of Eric Garner, a 43-year-old Staten Island man.

The judge maintained that state statutes require parties to show a particular need for public disclosure.

Garnett asked Christopher Pisciotta, a Legal Aid Society attorney, if his organization joined the request to reveal grand jury proceedings because it believed other clients were treated unfairly by grand juries.

Pisciotta told the judge the group was interested primarily in the grand jury's decision two months ago not to indict Daniel Pantaleo, the white New York Police Department officer seen putting the black Garner in what the medical examiner called a fatal chokehold.

"If all clients were treated the same, I would have less of a problem here. There is a perception that Officer Pantaleo was treated differently," Pisciotta said.

Disclosure is opposed by Richmond County District Attorney Daniel Donovan, who argued in court papers that grand jury witnesses came forward and testified "with full assurances of secrecy." Making their testimony public, the papers argue, would bring an "inevitable result of harassment or retaliation."

Pantaleo and other officers stopped Garner on the street July 17 on suspicion of selling loose, untaxed cigarettes. A video shot by an onlooker and widely watched online shows Garner telling the officers to leave him alone and refusing to be handcuffed.

Pantaleo responded by wrapping his arm around Garner's neck - what he said was a sanctioned takedown move and not a banned chokehold. The heavyset Garner, who had asthma, is heard on the tape gasping, "I can't breathe." He later was pronounced dead at a hospital.

The NYCLU and others have asked the court to order Donovan to release the grand jury transcript, including the testimony of Pantaleo and dozens of witnesses, detailed descriptions of evidence and other documentation. A similar step was voluntarily taken by the prosecutor in Ferguson, Missouri, when a grand jury there refused to indict a white officer in the fatal police shooting of Michael Brown, a black 18-year-old.

The Staten Island prosecutor's papers question the decision in Missouri, arguing that even though the names of witnesses were blacked out, news outlets compromised their anonymity by seeking "to analyze the transcripts with an eye toward criticizing the witnesses in a manner that would be obvious to at least the witnesses themselves as well as those familiar with the involvement in the case."

Such disclosure would "almost certainly have a chilling effect on the very type of witness cooperation that is most desired and the most difficult to obtain," the papers add.

Aside from the NYCLU, the other petitioners are the Legal Aid Society, Public Advocate Letitia James, the New York Post and local branches of the NAACP.