Islanders lose 3-2 to Capitals in shootout 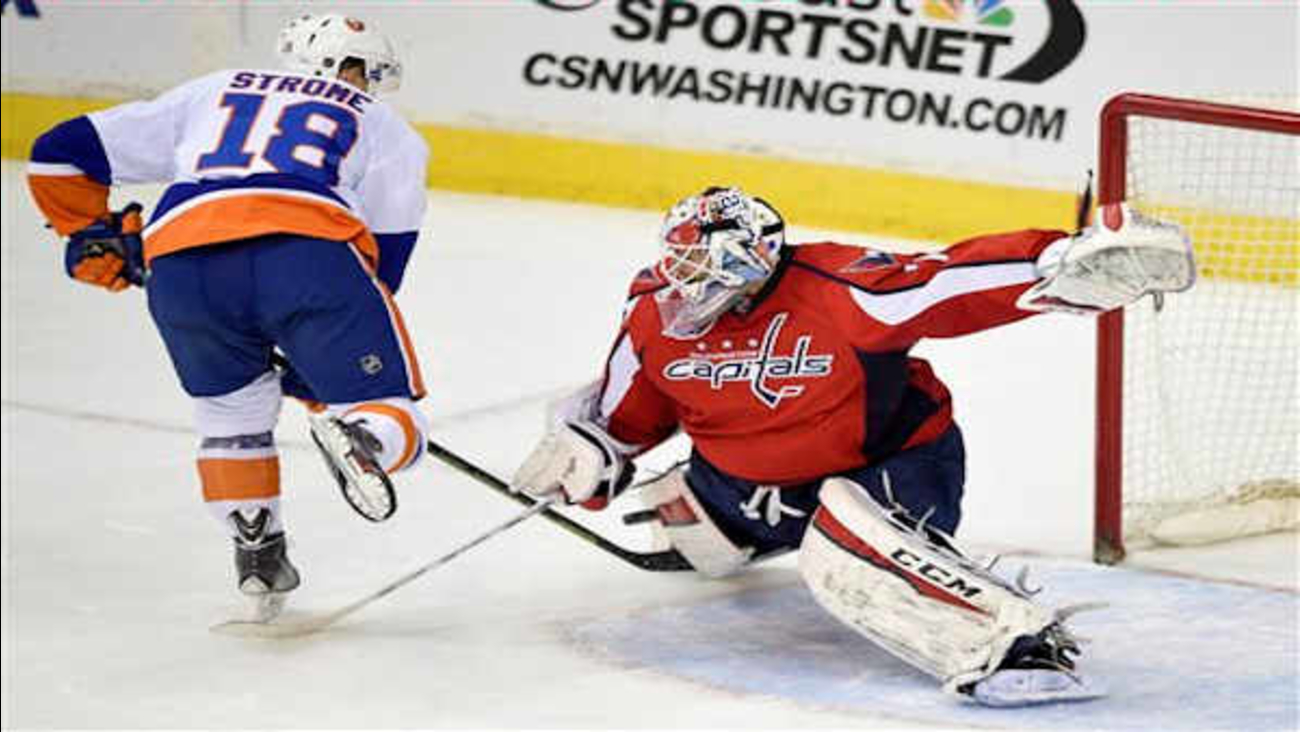 WASHINGTON -- A showdown between the first-place New York Islanders and surging Washington Capitals had all the elements of a postseason game, with one notable exception: the ending.

Instead of playing sudden death, the teams decided the outcome in a shootout. Evgeny Kuznetsov scored the lone goal in the tiebreaker, and the Capitals escaped with a 3-2 victory Saturday.

"I looked at that game as hopefully a playoff series at some point," Washington coach Barry Trotz said. "Two very good hockey teams that mirror each other in a lot of ways."

Braden Holtby had 30 saves for the Capitals, who registered their season-high fourth straight win and earned a split of the season series. Each team won twice on its own ice.

"They're one of the better teams we've played all year," Islanders center John Tavares said.

With the exception of a third-period fight between Washington's Tom Wilson and Matt Martin, neither team took a penalty after the first period. Defense was a priority, there were precious few breakaway chances and the goaltending was solid.

"It was great for us, the way we battled today," said Eric Fehr, who scored his 17th goal to give the Capitals a temporary lead in the third period.

After the Islanders forced overtime by scoring with goaltender Chad Johnson on the bench, Kuznetsov followed OT by beating Johnson on the first attempt of the shootout. Holtby subsequently denied all three New York tries, the last by Ryan Strome.

"We obviously couldn't help our goalie out in the shootout," Tavares said. "We didn't get any past Holtby."

The Islanders were 12-1 in games decided after regulation, including 7-1 in shootouts. But they didn't have much to lament after this one.

"That was a great game," New York coach Jack Capuano said. "I really liked the things that we did. It would have been unfortunate not to walk out of here with at least a point. Our guys battled."

Fehr put the Capitals up 2-1 at 14:26 of the third period, scoring at the end of a give-and-go exchange with teammate Brooks Laich. That snapped a deadlock that had been in place since late in the first period.

After Capuano pulled Johnson, Tavares bounced a shot in the crease off the right post. But the Islanders retained possession, and Strome put in a rebound from the left circle at 19:12 to force overtime.

Holtby and Johnson remained strong right up until the end. Johnson has spent the season serving as the backup to Jaroslav Halak, but on this day he put in a performance that was anything but second-rate.

"It's like anything else - the more you play, the better you play," Capuano said. "He gave us a chance."

Washington's Nicklas Backstrom earned an assist for his NHL-leading 64th point, breaking a tie with idle Patrick Kane of Chicago.

New York took a 1-0 lead at 7:41 of the first period on a wrist shot by Travis Hamonic, his 100th career point. It was Hamonic's fourth goal of the season, the first since Nov. 26 against Washington.

Matt Niskanen tied it at 19:19 with slap shot from the right circle off a behind-the-net pass from Backstrom, who registered his 46th assist and seventh point in his last four games.

Washington outshot New York 10-7 in a scoreless second period during which neither team was called for a penalty.

Early in the third period, Holtby skated across the crease to kick away a shot by Josh Bailey, who had taken a crossing pass from Tavares.

Notes: Holtby has gone 33 straight games without allowing more than one first-period goal. ... The Capitals recalled D Cameron Schilling from Hershey of the AHL. He was a healthy scratch, along with C Michael Latta. ... Tavares was held without a goal for the first time in five games. ... Eric Fehr played in his 400th game with the Capitals. ... New York fell to 22-6-1 in one-goal games.