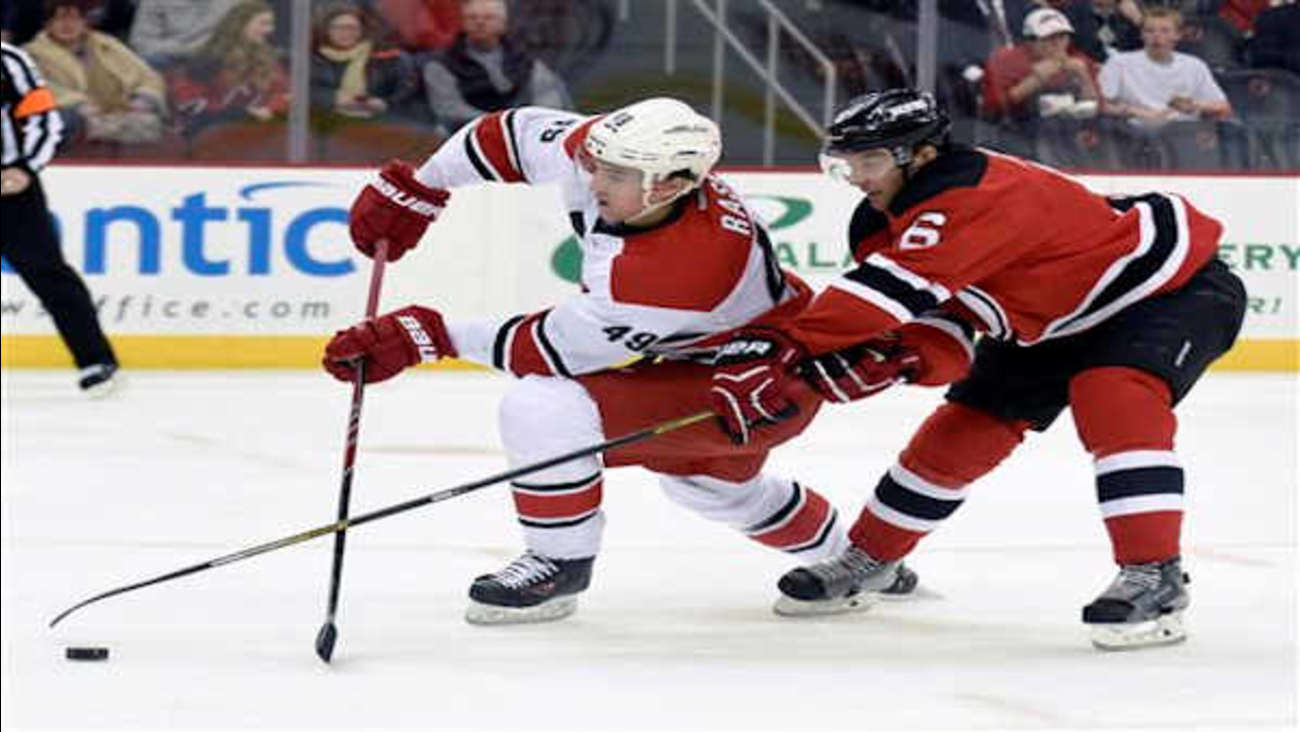 Greene's job is to play against the opposition's top line every night, and scoring a goal is a bonus.

Greene got one of those rare bonuses Saturday night, capping a three-goal first period with his first tally in 71 games as the Devils defeated the Carolina Hurricanes 3-1.

"He scored his first goal, but with what he does and what he brings, scoring is not something we worry about," Lamoriello said. "What he and Adam (Larsson) have done playing as a pair, playing against the top line each and every night, you can't ask for more than what they have brought."

Greene smiled when he was asked when he last scored, and he quickly answered in overtime against Minnesota last season.

"I have had some chances but it's not something I was extremely worried about," Greene said. "You want to score, and there is no better feeling than scoring a goal, but I just have to keep doing other things when I am not scoring."

Rookie Keith Kinkaid and Cory Schneider combined to make 31 saves. Kinkaid stopped 17 shots before leaving after he sustained a lower-body injury with 6:01 left in the second period.

Lamoriello said Kinkaid felt something in his lower leg but he didn't believe it was serious. He expects him to be ready for Monday's game against Arizona.

Former Hurricane Tuomo Ruutu and Adam Henrique also scored for the Devils, who won their third straight and improved to 10-2-3 in their past 15 home games.

The Devils are eight points out of a wild-card playoff berth with 23 games left in the regular season.

"You never say never, until they tell you you are out," Schneider said. "There are teams ahead of us that we have to jump over but I think you see we've played well in spurts. We have to take advantage of home ice and beat teams we can beat, and we are doing that now."

Jeff Skinner scored from between the circles with 6:04 remaining to deprive the Devils of their third shutout. Anton Khudobin had 16 saves before he was pulled for an extra skater with four minutes left.

Carolina failed to capitalize as the Devils blocked at least six shots.

"It's tough to spot a team a three-goal lead, but it's especially tough against this team," Skinner said. "They do a good job of backing things down and keeping things tight. We were generating good chances early on, but we couldn't get them to go. But it's tough to come back after that."

For the second time in two nights, the Devils opened a 3-0 lead. This time they did all the damage in the opening period with Ruutu, Henrique and Greene taking advantage of Carolina mistakes.

Ruutu gave the Devils the lead at 10:32, deflecting a point shot by Larsson past Khudobin for his seventh goal.

Henrique stretched the lead to two less than two minutes later. He blocked an attempt by Hurricanes defenseman John-Michael Liles at the left point to send the puck in the Devils zone and set up a breakaway.

Henrique beat Khudobin between the pads four days after being stopped on a penalty shot by Buffalo's Michal Neuvirth.

Jordin Tootoo, who has been getting increased playing time, set up Greene's first goal of the season. He took a pass from Mike Cammalleri, skated behind the Carolina net, and found Greene alone for a shot into a wide-open net with 28 seconds left in the period.

Kinkaid did a lot of scrambling but he was outstanding when the Hurricanes challenged him and lucky when he needed to be.

Alexander Semin had a shot that went off Kinkaid's glove and hit off the crossbar in the first period.

Kinkaid stopped a tip-in by Nathan Gerbe, a blast by Skinner, and a breakaway by Victor Rask in the first. His best save might have been a stop on a wrist shot by Andrej Nestrasil from low in the circles in the second.

NOTES: Devils D Eric Gelinas played in his 100th NHL game. ... Greene's last goal was against Minnesota on March 20 of last season. ... Scott Gomez had an assist on Ruutu's goal, giving him 472 points with the Devils and tying him for fifth place in team history with Bobby Holik. ... Liles played in his 699th NHL game. ... Carolina has given up at least three goals in 15 of the past 19 games against the Devils.