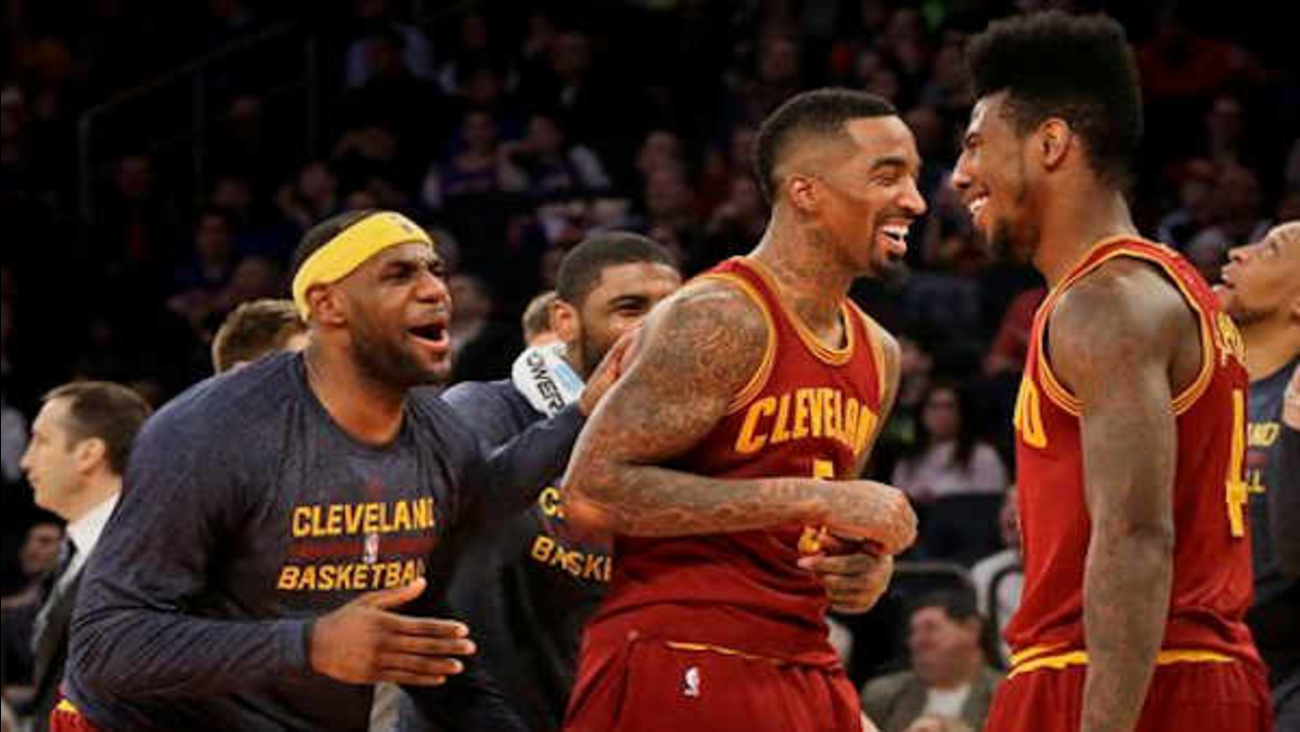 NEW YORK -- LeBron James was sitting comfortably on the bench and figured on staying there. Then J.R. Smith and Iman Shumpert punctuated their return to New York with an alley-oop that demanded he stand.

James and Kyrie Irving each scored 18 points, Smith had 17 and the Cleveland Cavaliers crushed the Knicks 101-83 on Sunday.

James moved past Allen Iverson into 22nd place on the career scoring list, and added seven rebounds and seven assists. Kevin Love finished with 16 points and 16 boards, combining with James and Irving to outscore the inept Knicks in the first half.

Cleveland won for the 16th time in 18 games and got good performances from Smith and Shumpert, who were acquired by the Cavs on Jan. 5 and have helped solidify a team that was still below.500 shortly after the trade.

"I think it's great," Smith said. "Our mindsets have changed, as opposed to trying to get a win to expecting to win every game."

The Cavaliers are 35-22 now and have been untouchable since returning from the All-Star break, hammering Washington by 38 on Friday and leading this one by 30.

Shumpert came off the bench for four points, five rebounds and seven assists, one of them when Smith jumped to catch his lob pass and slammed it down with his back to the basket for an 89-59 lead. The two guards hugged, and Smith jumped into James' arms heading back to the bench.

"I even told him in the timeout, 'Thank you for the price of admission,'" Cavs coach David Blatt said. "That was special and really nice that it was here in New York."

Langston Galloway scored 13 for the Knicks, who shot 3 for 19 from 3-point range and lost their seventh straight.

It was 62-38 at halftime and James, Love and Irving had 39 points. The Knicks missed all nine 3-point attempts in the first half.

"It's the same thing occurring over and over. It's nothing new," Knicks guard Tim Hardaway Jr. said. "We need a better start to games, point blank."

James has 24,383 points. He came in four behind Iverson and passed the former Philadelphia 76ers star quickly during a 12-point first quarter, when he slammed the ball so hard after a steal that it ricocheted off his left shoulder over the baseline after going through the basket.

He played only 29 minutes, ending his streak of 25-point games on the road at 11.

Cavaliers: Blatt said he couldn't say anything about the Cavs' plans to sign Kendrick Perkins, who was waived Saturday by Utah. Perkins and James were tweeting about it Saturday, though Blatt said he wasn't aware because he isn't on Twitter. "I have no knowledge of the medium," he said.

Knicks: Guard Alexey Shved, acquired from Houston on Thursday, played 3 minutes. He played with Cleveland's Timofey Mozgov for Blatt on the Russian national team, winning a bronze medal at the 2012 Olympics. ... Rookie Cleanthony Early was back to the bench after starting Friday's loss to Miami. Coach Derek Fisher said he liked Lance Thomas' ability to defend multiple positions. ... Backup guard Shane Larkin (illness) was out again and Fisher said it would probably be several more days until he could play.

MORE ON THE DUNK

Shumpert, wearing red from head to toe, said the backdoor lob to Smith wasn't planned, but a reaction to the way the Knicks were defending. "It was probably one of the best dunks I've probably seen in my short career," Irving said.

Fisher, a former president of the NBA Players Association, was glad to see an increased role for James, elected a vice president during the All-Star break. "I think he had always been pretty outspoken in the past in terms of how he felt about different issues that impacted players," Fisher said, "and I think it's a good thing if he wants to be involved and can put the time in and handle the responsibilities."