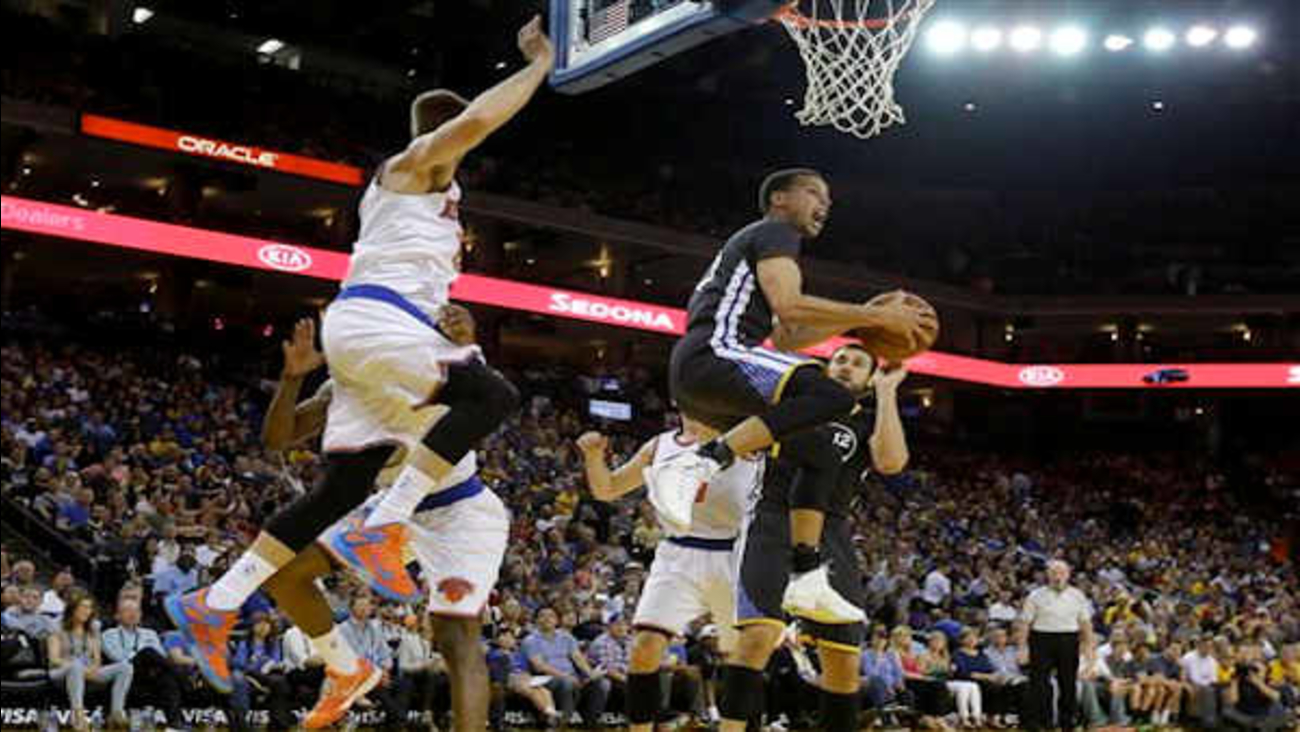 OAKLAND, Calif. -- Stephen Curry dazzled for 25 points and 11 assists playing on his 27th birthday, and the Golden State Warriors beat the New York Knicks 125-94 on Saturday night for their eighth straight home victory.

Curry ended the first half with a contested 3-pointer from the top of the arc as he leaned in and let it go, legs off balance. He finished 6 of 10 on 3s.

Klay Thompson added 27 points with six 3s, and the Splash Brothers combined for 29 points by halftime to highlight a 47-point second quarter that blew open the game.

Andrea Bargnani had 18 points for the Knicks and Alexey Shved added 14.

After having their five-game winning streak snapped a night earlier at Denver with the regulars resting, Curry and Co. kick-started a welcome six-game homestand with plenty of pizazz for the Western Conference leaders (52-13) as they topped their win total of last season.

Midway through the third, Curry drove the baseline and dished to Thompson for a 3. A couple minutes later, he drove through traffic for a left-handed layup and fell a few rows back into the baseline fans.

Curry was greeted in the locker room before the game by a cake in the form of his All-Star 3-point contest trophy and new Under Armour sneakers. Averaging 25.6 points in nine previous games against New York, he hit that mark again. Curry knocked down consecutive 3-pointers early in the opening quarter to find his stroke.

The Warriors lost 114-103 to the Nuggets with a short bench. Bogut sure looked fresh Saturday and had two big first-quarter dunks.

Draymond Green added 12 points, seven rebounds and five assists as the Warriors beat the Knicks for the ninth time in 12 meetings and 19 in 25.

New York snapped its five-game skid Thursday at the Lakers while shooting 9 of 18 on 3-pointers. But a sluggish, sloppy second quarter put the Knicks in an insurmountable 73-52 halftime hole. Longtime fan and director Spike Lee watched the rout from courtside.

University of Washington coach and former Warriors guard Lorenzo Romar was shown on the "Kiss Cam" late in the second quarter but didn't see it, so they moved on to another couple.

Knicks: Coach Derek Fisher was whistled for a technical with 2:15 left in the first half for what appeared to be arguing a foul call. ... The Knicks are 1-13 on the road against the Western Conference. ... New York played the fourth game of a five-game road trip out West and the last meeting vs. Golden State. The Knicks, who split last season's series with each team winning on the road, haven't taken a series with the Warriors since 2000-01.

Warriors: After two home games in February, this stretch will match their longest at Oracle Arena all season.... Golden State is an NBA-best 29-2 at home. ... The Warriors are 10-0 on Saturday. ... C Ognjen Kuzmmic, called up earlier in the day from the D-League Santa Cruz Warriors, wasn't available as the Warriors wanted him to have his injured right shoulder examined by their team doctors. ... F David Lee, who played 31 minutes at Denver but none at home against Detroit on Wednesday, checked in with 47 seconds left in the first.

Knicks: At Phoenix on Sunday.

Warriors: Host the Lakers on Monday.