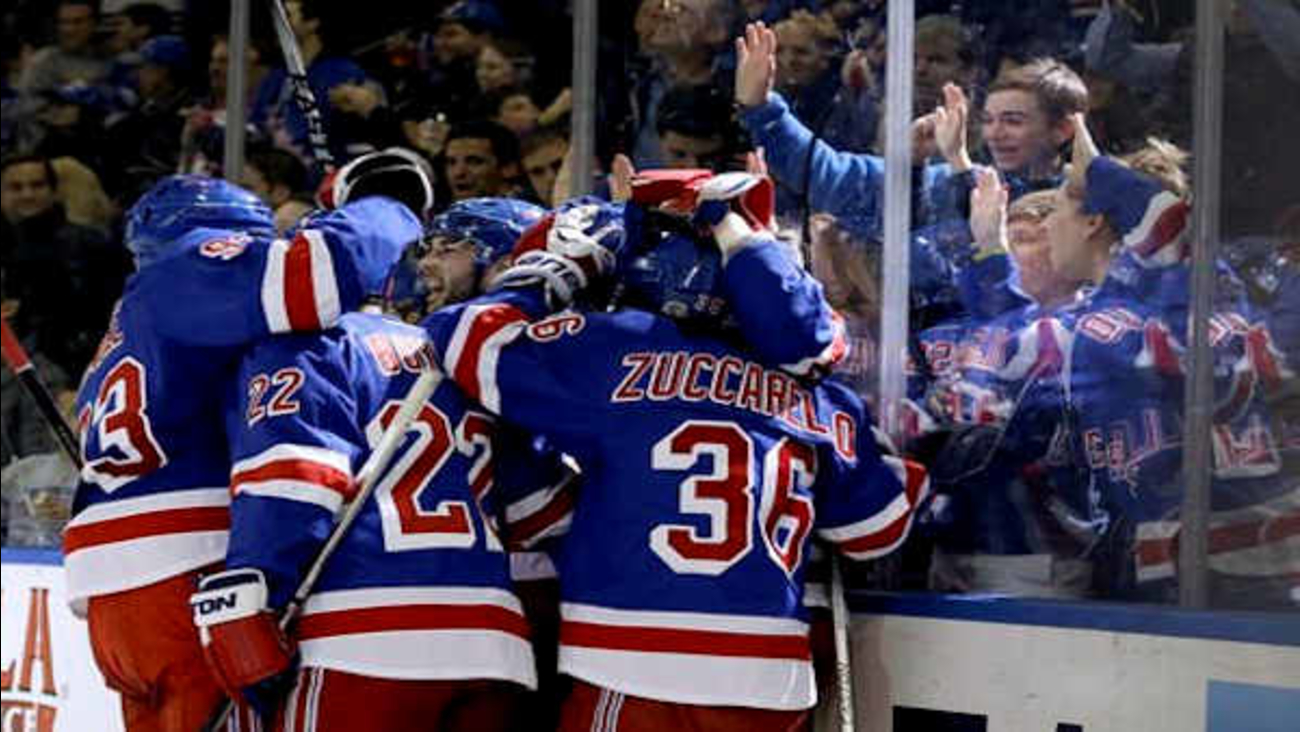 NEW YORK -- Derek Stepan broke out of a long slump with two goals and an assist, and the New York Rangers caught the Western Conference-leading Anaheim Ducks atop the NHL standings with a 7-2 rout Sunday night.

Stepan, who had no points in his previous 12 games, scored a goal in each of the first two periods as the Rangers found their missing offense while playing the second of back-to-back games. They snapped the Ducks' four-game winning streak as Anaheim (46-21-7) began a five-game trip.

The Rangers (46-18-7), Ducks, and Montreal Canadiens all have 99 points, but New York has played fewer games than both.

New York jumped on starter Frederik Andersen with three goals in the first period and chased him in favor of John Gibson 10:16 in. Chris Kreider and Carl Hagelin also scored in the opening frame, and J.T. Miller and Stepan tallied against Gibson in the second as New York built a 5-2 lead.

Jesper Fast put the Rangers ahead by four at 6:12 of the third, and Derick Brassard made it a season-high seven goals for New York just 2:05 later. Keith Yandle tied a career high with three assists - his first helpers in 10 games with the Rangers.

Cam Talbot got off to a rare slow start, allowing two goals to Anaheim's Corey Perry in the first period when the Ducks had 17 shots. He was perfect the rest of the way - stopping six in the second and 36 overall.

Talbot improved to 15-3-3 since No. 1 goalie Henrik Lundqvist was forced out of the lineup by a neck injury. The Rangers are 17-3-3 in that span, including a 3-2 shootout win at Carolina on Saturday.

Kreider got New York on the board first with his career-best 18th goal, 1:24 in, when he slammed in a loose puck from the crease after a shot by Ryan McDonagh was tipped by Stepan.

The Ducks responded 1:26 later when Perry scored his first to get to the 30-goal plateau for the fifth time in the NHL.

Andersen made back-to-back, in-close saves on Kreider and Rick Nash about 50 seconds into the advantage, but fine passing along the blue line set up New York's second goal. Yandle moved it to his left to Stepan at the point for a shot that got through Kreider's screen and beat Andersen at 5:43 for his 12th goal.

The Rangers, who mustered only 13 goals in their previous eight games, weren't done yet. Kevin Hayes spun in the right circle and fired a shot that hit Hagelin and got past Andersen for his 16th goal at 10:16.

That ended Andersen's night after he stopped only four of seven shots. Gibson turned aside all four he faced in the first.

Perry got the Ducks back within a goal with 8:48 left in the first, driving by McDonagh and flipping a shot past Talbot for his 31st goal.

NOTES: Seven goals are the most allowed by Anaheim this season. ... The Rangers' power play was 0 for 18 over the previous seven games, 1 for 25 in the last 10, and 3 for 43 in the past 17 before Stepan scored. ... New York leading scorer Rick Nash snapped a five-game point drought with an assist on Stepan's first goal. ... Ducks D Clayton Stoner returned to the lineup after being a healthy scratch on Friday. Simon Despres sat out. LW Matt Beleskey was also scratched, replaced by Emerson Etem. ... New York is 16-4-5 against Western opponents this season and 11-1-1 against the Pacific Division.