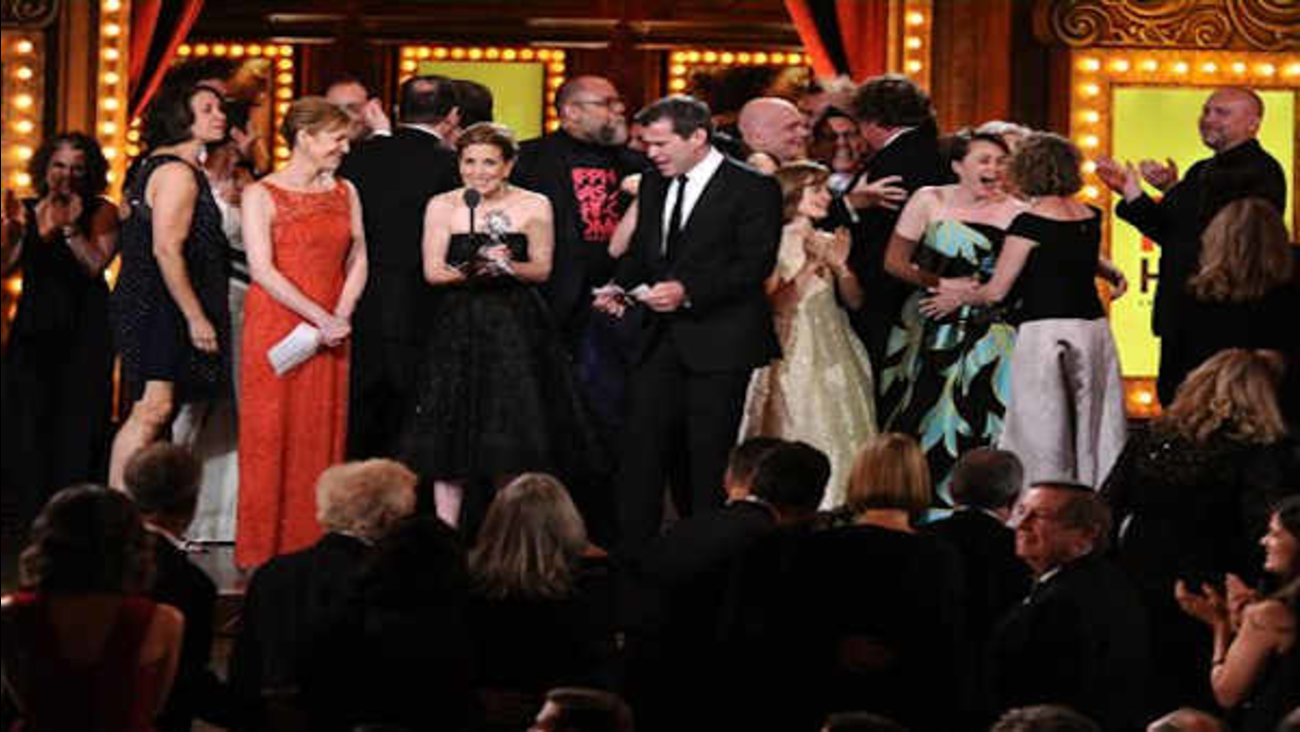 NEW YORK -- The poignant and groundbreaking coming-of-age show "Fun Home" was named best musical at the Tony Awards on Sunday, one of five big trophies it won on the way to making history for its composing team.

It tied for the winningest show on Broadway this season with the British import "The Curious Incident of the Dog in the Night-Time," which also won five awards, including best play. The sumptuous revival of "The King and I" also had reason to whistle a happy tune, with four awards including best revival.

The melody was sadder for "Something Rotten!," which came into the night with 10 nominations but left with only one award, the same number that both "Wolf Hall" plays took home. "Hand to God," with five nominations, saw no divine love and Chita Rivera's return to Broadway in "The Visit" was given the cold shoulder.

London-born actor Alex Sharp won best lead actor in a play for "The Curious Incident of the Dog in the Night-Time," beating out stars Bradley Cooper and Bill Nighy.

"This time last year I was picked up my diploma graduating from Julliard, so to be holding this is insane," he said. "I just want to dedicate this to any young person out there who feels misunderstood or who feels different and answer that question at the end of the play for you: Does that mean I can do anything? Yes it does."

The adaptation of Mark Haddon's best-selling novel also won best play, lighting, scenic design and earned its director Marianne Elliott a Tony, too, with a total of six nominations going into the evening.

"Fun Home," based on Alison Bechdel's graphic novel about growing up with a closeted dad in a funeral home and the first musical to have a lesbian as its main character, won for best book, best lead actor in Michael Cerveris and best direction from Sam Gold. It came into the night with 12 nominations and left with the top trophies.

Cerveris won his second Tony for playing the closeted and suicidal father at the heart of "Fun Home" while O'Hara got her first Tony after six nominations, winning for her role as the English school teacher in the classic musical "The King and I."

"I love what I do and I don't need this but now that I have it I've some things to say," she said. "My parents who are sitting next to me for the sixth time, you don't have to pretend it's OK this time."

Songwriters Jeanine Tesori and Lisa Kron became the first female writing team to nab a Tony for musical score for "Fun Home." But that milestone happened during a commercial break and viewers never saw it.

The British had a big night, with "Skylight" winning for best revival, and Helen Mirren nabbing her first Tony for playing Queen Elizabeth II in Peter Morgan's "The Audience." She already won an Oscar for playing the monarch in the movie "The Queen."

"An American in Paris," which had a co-leading 12 nominations, won four technical awards, including best scenic design and one for Christopher Wheeldon for best choreographer.

One of the show's highlights came as Joel Grey, who recently announced he was gay, introduced "Fun Home" with his daughter, Jennifer Grey, who joked that the show was about a "brilliant and complicated father." Joel Grey acknowledged that the topic was one his daughter "knew something about."

Another highlight: Jason Alexander and Larry David bickering about awards and their show "Fish in the Dark." David joked that the reason it got no nominations was due to anti-Semitism.

Two Broadway favorites - Annaleigh Ashford and Christian Borle - won for best featured roles. He plays a sexy William Shakespeare in "Something Rotten!" and she played an incompetent ballet dancer in "You Can't Take It With You." It was her first and his second awards.

"I can't believe I am standing here right now for the worst dancing that ever happened on Broadway," Ashford said.

"The King and I" was crowned the best musical revival and it won for best actress in O'Hara and best musical costumes. One of its stars, Ruthie Ann Miles, won in her Broadway debut as best featured actress in a musical.

She read her speech off her phone and thanked, among many others, her husband. "Thank you for agreeing to come on this crazy ride. Where are you? There you are. There's a lot of people here."

Josh Groban led a moving "In Memoriam" section when he sang "You'll Never Walk Alone" from the 1945 Rodgers and Hammerstein musical "Carousel," backed by the casts of all the shows appearing on the telecast.

The nominated musicals "On the Twentieth Century," ''Something Rotten!" ''The Visit," ''The King and I," ''On the Town," ''Fun Home" and "An American in Paris" had songs performed.

A few other non-nominated shows, including like Vanessa Hudgens' "Gigi" and Matthew Morrison and Kelsey Grammer with "Finding Neverland," also got spots. The cast of "Jersey Boys" ended the show with "Oh What a Night."

Producers are hoping to beat last year's average of 7.02 million viewers. But as happened last year, the Tonys competed against Game 2 of the NBA Finals.