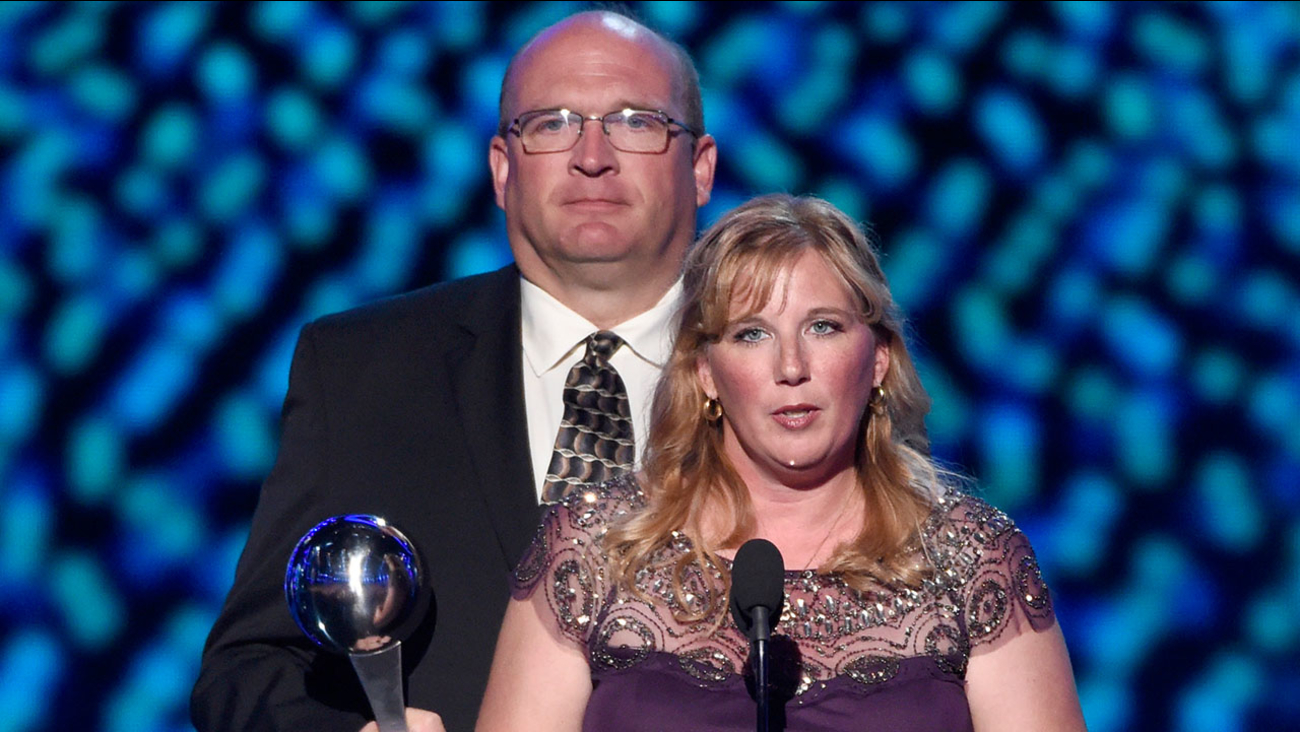 Lisa Hill and Brent Hill accept the best moment award on behalf of their daughter Lauren Hill at the ESPY Awards at the Microsoft Theater on Wednesday, July 15, 2015. (AP)

In a special presentation at the 2015 ESPY Awards, ESPN honored the life of college basketball player Lauren Hill, whose fearless resolve touched the nation last season.

Hill's parents Brent and Lisa accepted the ESPY Best Moment Award at the ceremony on July 15. In the acceptance speech, Lisa asked viewers to continue her daughter's legacy in fighting against all odds.

"Lauren showed us through heart, determination, courage, strength and faith that, no matter what, it is possible to achieve your dreams," she said.

Lauren Hill's legacy honored at the #ESPYS with the award for Best Moment. #Layups4Lauren pic.twitter.com/hXQ6IStmkZ

I'm always in awe by those who accomplish so much especially when the odds are stacked against them. Lauren Hill is truly inspiring.

Thank you Lauren Hill for your bravery and COURAGE! You proved that being a real winner means you don't always get awarded for it! #ESPYS

As Hill's condition was deteriorating, the NCAA agreed to let Hill's team move up its opening game against Hiram College by two weeks. Xavier University offered its 10,000-seat arena so more people could attend, and the game sold out within an hour. On Nov. 2, Hill realized her dream as she was cheered on by the 10,250 attendees and televised audience, scoring the first and last basket of Mount St. Joseph's 66-55 victory over Hiram.

She ended up playing in four games and made five layups. LeBron James tweeted how much of an inspiration she was.

Until we officially meet again, take care and continue to be that LEADER we all love! #RIPLaurenHill Sincerely, LeBron James

On April 10, Hill passed away at the age of 19, but not before raising more than $1.5 million for cancer research.

After it was announced that Caitlyn Jenner would be awarded the Arthur Ashe Courage Award, many felt Hill was more deserving. Hill's mother previously told USA Today, however, that she did not think Hill "would have had a strong opinion on [the award] either way."

"She was pretty down-to-earth. She respected [people from] all walks of life and people who were different. She would have never been judgmental or harsh or anything like that. That's just not who she was."