WABC
By Tim Fleischer
PARK SLOPE (WABC) -- Con Edison crews responded to more manhole fires Tuesday, including one that caused the evacuation of a Brooklyn building and set a parked car on fire.

Residents in five homes in an adjacent building were forced to leave after the car caught fire and high carbon monoxide levels were detected.

Con Ed crews responded to fix the underground cables, and the CO levels dropped. Most residents were allowed to return to their homes before noon.

A little more than a dozen power outages were reported while repair work continued. By afternoon, all power had been restored.

"The flames started off small and they grew maybe four feet over the car at one point," said resident Jacob Loban. "I could see the gas tank was in the back so I wasn't worried about that exploding".

The fire grew larger before firefighters were able to put it out. The car was destroyed. And by first light the burned-out cables were pulled from the pit, and workers started to provide temporary electrical service to some residents.

Robert Kwiatkowski almost parked his car in that spot when he came to help a friend. "I'm thinking maybe I leave my car here. I decided no, no. I parked it down the block," he said. ('You're lucky. It would have burned up?') "Yep," he said.

Con Ed confirmed that it has responded to more than 200 manhole-related incidents in the five boroughs since 10 a.m. Sunday.

Another manhole fire was reported in Manhattan Tuesday at Broadway and 158th Street, and a stretch of Broadway was closed southbound.

On Monday morning, the FDNY responded to reports of an explosion in Brooklyn that injured one man at the intersection of Prospect Park West and Fifth Street. The blast, captured by Channel 7 photographer John Sprei, was the second of two explosions that rocked Park Slope, as firefighters were already on the scene shortly after the first explosion occurred.

Fire officials believe they occurred in an underground electrical vault that could have possibly been weather related.

The first explosion sent a manhole cover 40 feet into the air and struck a man walking his dog. "The manhole cover blew up in the air, almost knocked me off my feet and came down and hit a guy on the head walking ahead of me," a witness said. "He was unconscious."

The man suffered serious injuries and is in stable condition. His dog, Abby, spooked by the explosion, ran into Prospect Park.

"She had some cracked nails and tears on her toe pads, which is normal for a dog that has been spooked and run, run, run, and don't realize they are cutting their feet," said Sean Casey, the founder of Sean Casey Animal Rescue. 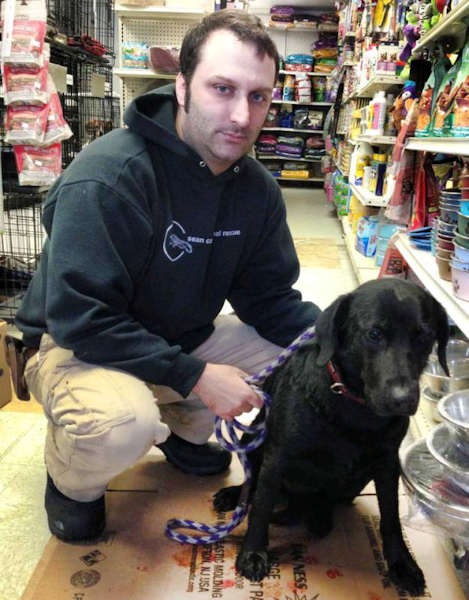 He retrieved Abby at a pharmacy some three miles away and tracked the owner through a chip in the Black Lab, and was able to return Abby to the victim's wife.

"She rushed right over and she was very happy to have the dog back," said Casey. "And when she got her we were surprised to see they are supporters of our rescue and have been here several times."