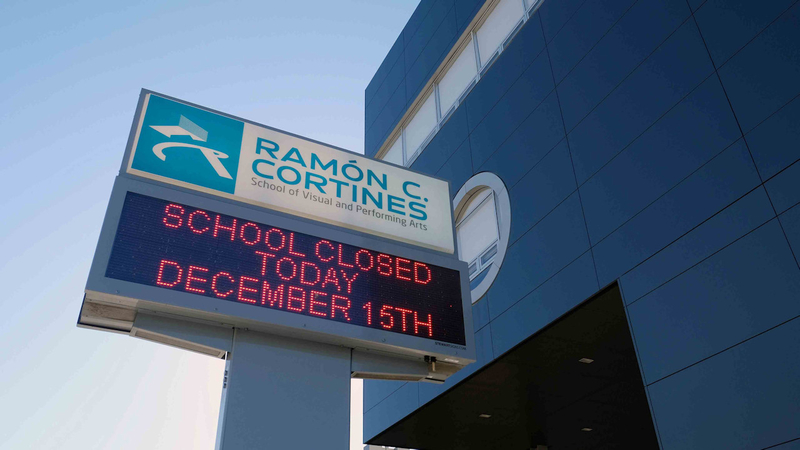 LOS ANGELES (WABC) -- Los Angeles law enforcement and city leaders are defending the decision to shut down the vast Los Angeles Unified School District due to an emailed threat.

Police Chief Charlie Beck and Mayor Eric Garcetti told reporters Tuesday that they stand behind the superintendent's order to close the Los Angeles Unified School District's more than 900 schools and 187 public charter schools as a precaution.

"It is very easy in hindsight to criticize a decision based on results the decider could never have known," Beck said at a news conference.

Superintendent Cortines said every campus would be searched, and he asked for a report on the searches certifying that all buildings are safe.

New York City officials say they and many cities nationwide received the same threat and quickly determined it was a hoax.

"We cannot allow ourselves to raise levels of fear," said Bratton, who once ran the Los Angeles Police Department.

The person who wrote the note, Bratton said, claimed to be a jihadist but made errors that indicated the writer was really a prankster, including spelling the word "Allah" with a lowercase "a."

New York Mayor Bill de Blasio told reporters that he was "absolutely convinced" there was no danger to schoolchildren in his city.

"There was nothing credible about the threat. It was so outlandish," de Blasio said.

Beck says it's easy to criticize a decision when someone has no responsibility for its outcome. He says district police contacted his department late Monday about a threat sent to school board members.

Officials say it was a tough decision but the safety of students and employees was their main concern.

Earlier, officials said that the threat was made to many schools in the district. An official says the threat was emailed to a school board member and is believed to have come from an IP address in Frankfurt, Germany.

The president of school board insisted the closing of the schools was taken out of abundance of caution.

"We need to cooperation of the whole of Los Angeles today," said school board President Steve Zimmer. "We need families and neighbors to work together with our schools and with our employees to make sure our schools are safe throughout today."

A senior law enforcement official told ABC News the threat was not serious and the LAPD is not on tactical alert. The threat is not connected to any previous threats or the San Bernardino investigation, the official said.

White House spokesman Josh Earnest said he would not second-guess the decisions made in Los Angeles or New York. He said the FBI has been in touch with California authorities.

The Los Angeles school district, the second largest in the nation, has 640,000 students in kindergarten through 12th grade. It spans 720 square miles including Los Angeles and all or part of more than 30 smaller cities and some unincorporated areas.

The decision to close the district disrupted the morning routines of many Los Angeles families.

Lupita Vela, who has a daughter in the third grade and a son who is a high school senior, called the threat "absolutely terrifying" in light of the San Bernardino attack, which killed 14 people earlier this month.

She got an automated phone call informing her of the closure.

"I know the kids are anxious," she said.

Vela said she worries about talking to her kids about the threat and terrorism in general. She's concerned about her daughter feeling safe in class.

"I don't want this to be in the back of her head," she said. "Who knows what it does psychologically to kids? Is this going to cause her some kind of trauma so that she's not going to feel safe at school?"

Los Angeles Unified School District spokeswoman Shannon Haber said that she didn't know if the district has ever closed all of its schools before.