WABC
CLIFFSIDE, N.J. (WABC) -- A boil water advisory is still in effect after a massive construction crane fell from a support in New Jersey Wednesday morning, breaking a water main.

The advisory has been issued by United Water for Cliffside Park, Englewood Cliffs and Fort Lee. Residents should boil their water for at least one minute for drinking, cooking, baking, making ice cubes, taking medication, brushing teeth, washing food, mixing baby formula or food, mixing juices or drinks, feeding pets, and all other consumption. Water does not have to be boiled for showering, washing dishes or clothes. The advisory will continue for 24 to 48 hours.

The 600,000-pound crane was successfully removed from the road overnight, and a United Water emergency crew has begun excavating the area. Repairs are expected to be completed sometime Thursday night.

The crane, which was being used as part of a redevelopment project, was being moved when it fell around 8 a.m. Wednesday at the corner of Anderson Avenue and Grant Avenue. United Water emergency crews were immediately dispatched, targeted the break and isolated the 24-inch water main within two hours.

Some businesses and homes were flooded, exacerbating traffic issues that already existed in the area because of the construction. Water was shut off to hundreds of homes and businesses before the main was capped.

United Water laid temporary lines to restore water service, but some were still having water problems in the area. Service to the remaining 36 customers without water is expected to be restored by 6 p.m. Thursday.

A picture from inside DonnaGio's Pizza: 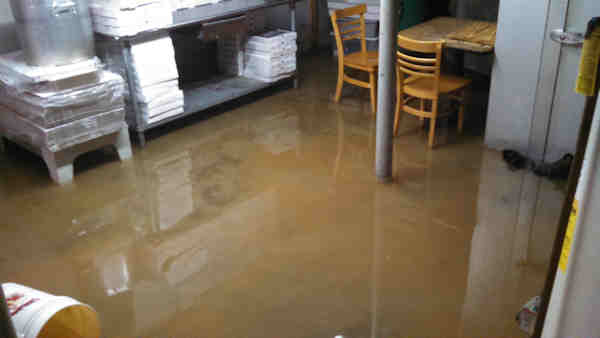 Jessica Rivera lives just up the block, and she showed Eyewitness News that the water pressure in her building was still weak more than 12 hours after break.

"We'll either go to a hotel or my mother's house in Union City," she said. "It's tough with children."

United Water is working with the Bergen County Office of Emergency Management, which arranged potable water tankers to be available for those residents without water service.

"We appreciate the support and patience of our customers in the area," said Tom Neilan, senior director of contract operations for United Water. "We realize that a boil water advisory is a disruption to people's daily activities. Our crews will remain on-site and work as quickly and safely as possible to restore full water service to the affected area."

OSHA and the DEP are investigating how the incident happened. The crane, which has the ability to stretch to 400 feet, is owned by a Brooklyn company.

One business owner shot cell phone video of the water flowing through his shop.

"I see the water too much here like tsunami," Yogesh Shah said. "I make a video, too, and I make three brooms, and I push out the water."

Workers at a nearby animal hospital said they lost thousands of dollars in equipment and supplies.

"We have the laundry machine, the dryer, an oxygen machine, medications all out," hospital worker Isaac Alejo said.

Three hospitalized animals and two in boarding were taken to another facility.