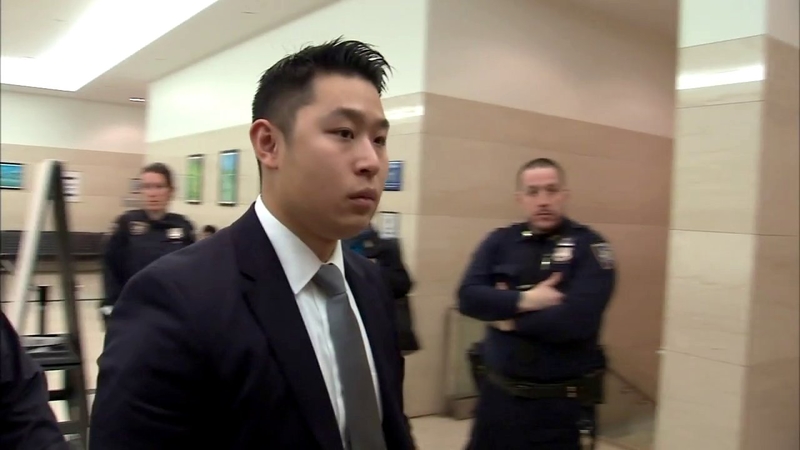 Here is the full text of Thompson's statement:
"Peter Liang was indicted, prosecuted and subsequently convicted by a jury because his reckless actions caused an innocent man to lose his life. There is no evidence, however, that he intended to kill or injure Akai Gurley. When Mr. Liang went into that building that night, he did so as part of his job and to keep the people of Brooklyn and our city safe.

"In sentencing a defendant, the facts of the crime and the particular characteristics of that person must be considered. Mr. Liang has no prior criminal history and poses no future threat to public safety. Because his incarceration is not necessary to protect the public, and due to the unique circumstances of this case, a prison sentence is not warranted.

"Justice will be best served if Mr. Liang is sentenced to five years of probation, with the condition that he serves six months of home confinement with electric monitoring and performs 500 hours of community service. I have provided this sentencing recommendation to Justice Chun.

"As I have said before, there are no winners here. But the sentence that I have requested is just and fair under the circumstances of this case. From the beginning, this tragic case has always been about justice and not about revenge."

"It was a slap in the face," said Hertencia Petersen, the victim's aunt.

Akai Gurley's family says the public new before they did about the Brooklyn District Attorney's recommendation to the court to give former officer Peter Liang probation not jail time.

The rookie cop was convicted last month of manslaughter for shooting and killing Gurley in a poorly lit stairwell in East New York back in November 2014.

The 28-year-old father was unarmed.

"A jury of his peers convicted him of manslaughter. So you're telling me they got it wrong? No they did not. It's nonsense that the DA is going to recommend no jail time," Petersen said.

The DA is asking the court to give Liang five years of probation including six months of home confinement.

PBA President Patrick Lynch said:
"Police officers are human being and as such can make mistakes while risking their lives to protect the community. Criminalizing a mistake, even a tragic accidental discharge like this, serves no good purpose. The reasons cited by the DA for justifying no jail time in this tragedy are the very same reasons that the officer should not have been indicted in the first place."

Gurley's mother and step-father who now live out of state said in a statement:
"We are outraged at District Attorney Thompson's inadequate sentencing recommendation. Officer Liang was convicted of manslaughter and should serve time in prison for his crime. This sentencing recommendation sends the message that police officers who kill people should not face serious consequences."

Borough President Eric Adams says he's not sure if he would have made the same call as the DA.

At the Pink Houses Wednesday night, Eyewitness News found anger and frustration over the DA's recommendation.

"I think you should get jail time, it's like anybody else who commits a murder," said Kai Franklin, a resident.

"Everyone should be treated for murder the same way regardless of who they are," said Richard Lopez, a resident.

"He should be doing at least 30 to life. If he didn't do it intentionally why didn't he help him?" said Fitz George, a resident.