WABC
By Eyewitness News
TIMES SQUARE, Manhattan (WABC) -- A woman from Canada was attacked by the "free hug guy" in Times Square Thursday because police said she didn't give the man a tip.

The ordeal happened on Broadway near West 46th Street sometime before 10:45 a.m., and the victim was a 22-year-old woman from Ottawa.

Eyewitness News captured an exclusive photo of the victim, which can be seen above.

The NYPD said the woman took a picture with Jermaine Himmelstein, 24, who was holding a sign that said "free hugs." Police said Himmelstein then demanded three times that the woman give him money -- and she refused each time. After the third denial, he punched her in the face.

The woman sustained a black eye, swelling to the face and some cuts and bruising. She was taken to the hospital, where she was treated and released. She was flanked by police as she was escorted back to her hotel Thursday evening.

The victim was first thought to be a tourist, but police said she's been living in Manhattan recently.

Himmelstein apparently took off, but police took him into custody in Union Square in connection with in the assault later in the day.

Himmelstein is charged with robbery and fraudulent accosting. Detectives at Midtown North led Himmelstein from the precinct as he acknowledged only being aggressive. 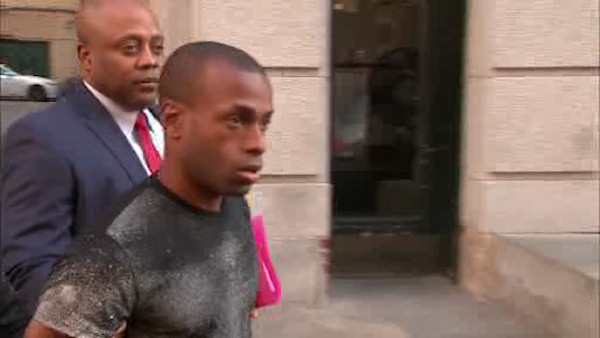 Police said the suspect in the case is no stranger to this type of activity. He has multiple prior arrests - some of which were also for assault.

There have been so many issues with the tip dependent characters in Times Square, Mayor Bill de Blasio just signed a bill a few weeks ago allowing city officials to restrict the characters' movements to keep them from blocking pedestrians in the traffic-free parts of the square.
Related topics:
times squarenew york cityattackcostumed characters
Copyright © 2020 WABC-TV. All Rights Reserved.
More Videos
From CNN Newsource affiliates
TOP STORIES