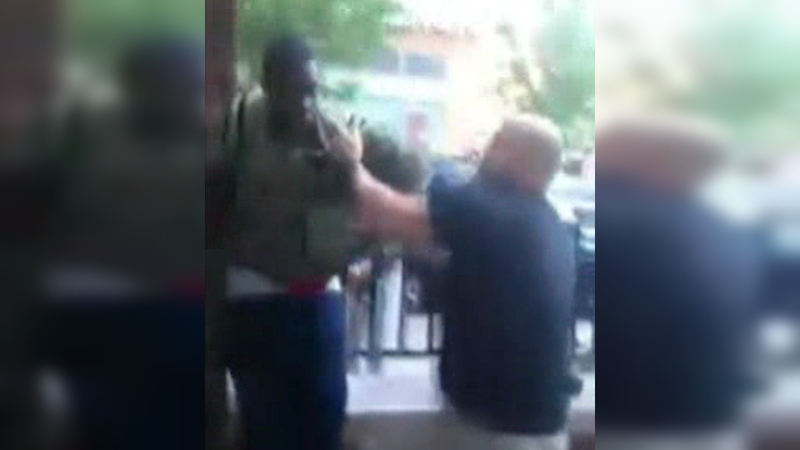 NEW YORK (WABC) -- The moments after a dramatic arrest in a Harlem building, and the arrest itself, were caught on camera.

Now a plainclothes cop is being investigated by Internal Affairs for his conduct.

With cameras recording, he reared back and appeared to sucker punch 19-year-old Jahnico Harvey, then with other officers took him down.

But like so many of these stories, there is a backstory.

This one starts with a pair of dirt bikes roaming the neighborhood Thursday afternoon, around the time two officers pulled over a Hyundai that had been reported stolen.

Cops say the two bikers caused a diversion allowing the people in the car to get away.

Two members of the 32nd precinct's Anti-Crime Squad chased one of the bikers, 21-year-old Dayshawn Bettway, into the lobby at 134th and Frederick Douglas.

And as a crowd of onlookers got closer, one of them pulled his gun.

A few minutes later, with Bettway in cuffs, Harvey, who'd been recording video during the original arrest appears to be punched by the plainclothes officer. He was then arrested for menacing.

In a statement Friday night, the NYPD said its "Internal Affairs Bureau began an immediate investigation. A police officer shown on the video has been placed on modified assignment, pending internal review."

Police officers are authorized to pull their gun if they feel threatened.

It's the punch, experts say, when there was no obvious threat, that's the real problem here.

"You have to try to remain professional at all times and not overreact, and now he puts himself and his career in a real serious position," said Joseph Giacalone, of John Jay College.