KFSN
CLOVIS, Calif. -- The computer, that was accidentally left on a plane years ago, contained priceless memories.

Stephanie Cooper stepped off a plane accidentally left behind luggage in 2012.

It was a short flight, "it was only about an hour," and she remembers it clearly now, "I lost a laptop on the plane," Cooper said.

The laptop was in a bag under her seat along with a hard drive, filled with memories of two of her kids -- several years worth of pictures -- possibly gone forever.

"Can't put a price on it, an amount it would be worth to get those back," Cooper said.

As soon as she got off the plane, she called the airline, "they said, 'your call would be handled in the order received.'"

It took 3 years to get a callback but it didn't come from the airline. It came from a woman at an airport in Rockford, Illinois. Cooper says the woman powered up the laptop, checked the desktop and found a shipping label with Cooper's phone number.

2 weeks later, a Fed Ex truck delivered the laptop straight to Cooper's doorstep but happiness quickly turned into sadness. The laptop and bag were in the box but the hard drive was not - the words, "gone forever," a little more real this time, "it's the same feeling I felt when I realized it was gone," Cooper added.

The hard drive could still be out there, somewhere along with the pictures, "I lost a couple years, I still have the rest."

She also still has family with four kids and plenty of time to make new memories.

"I would rather have you than a bunch of pictures," Cooper said to her kids.
Related topics:
clovisnationallost and foundu.s. & worldgood news
Copyright © 2020 KFSN-TV. All Rights Reserved.
GOOD NEWS

'We were all very lucky': Strangers save family from flood 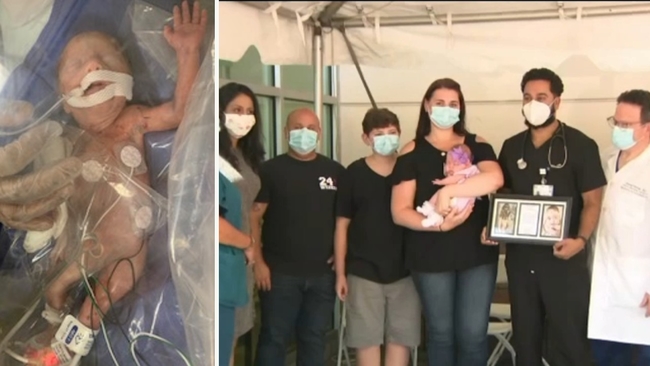