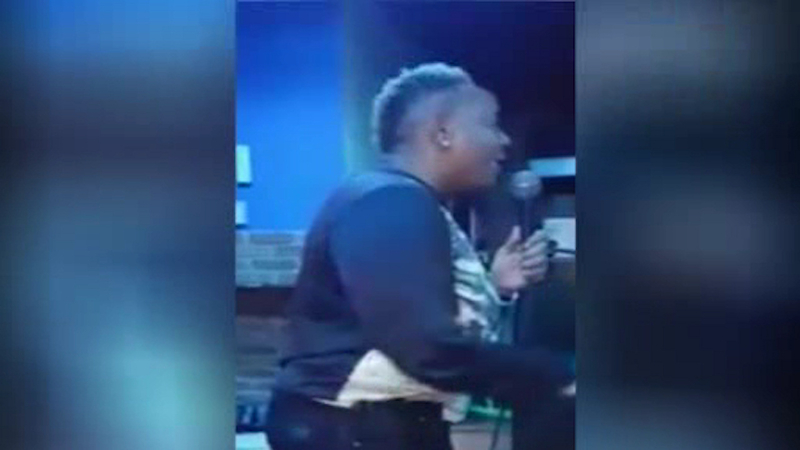 BLOOMFIELD, New Jersey (WABC) -- It was no laughing matter for a comedian who got caught in the crossfire in New Jersey on Friday night.

When bullets started flying while she was on stage in Bloomfield, it wasn't funny at all.

30 shots were fired from outside the club. Three gunmen were trying to hit someone inside. They hit six other people they were not aiming for.

"When I first walked out it was nothing but smoke, the place was smoked up, tables and chairs were thrown everywhere, people were lying down on the floor," Byrd said.

Ms. Byrd already has a comedian's take on Friday night.

But it sure wasn't funny then.

"I was afraid you know, fear kicks in," Byrd said.

Byrd was not hurt in the shooting. She says she will try to be more careful about security at the clubs she works at in the future. The club in question was closed after the shooting for fire and health code violations.
Related topics:
bloomfieldbarshooting
Copyright © 2021 WABC-TV. All Rights Reserved.
TOP STORIES
Suspect fatally shot by agents during kidnapping investigation in NJ
LIVE | NJ Gov. Murphy holds COVID update
NYC ready to move homeless out of hotels, back to shelters: Mayor
Violent, multi-vehicle crash leaves 2 dead, 3 injured in NJ
What to buy and what to skip on Amazon Prime Day
NYC to hold vaccination contest for $2,500 prizes in July
80-year-old rescued, 3 hurt as flames shoot from NYC apartment building
Show More
NYC renames parks to honor Black American experience
LIVE: Biden speaks after hours of talks with Russia's Putin
MacKenzie Scott's $2.7B donation: At least 8 NY area recipients
AccuWeather: Dry delight
Man wanted for brutally beating man in head with cobblestone
More TOP STORIES News