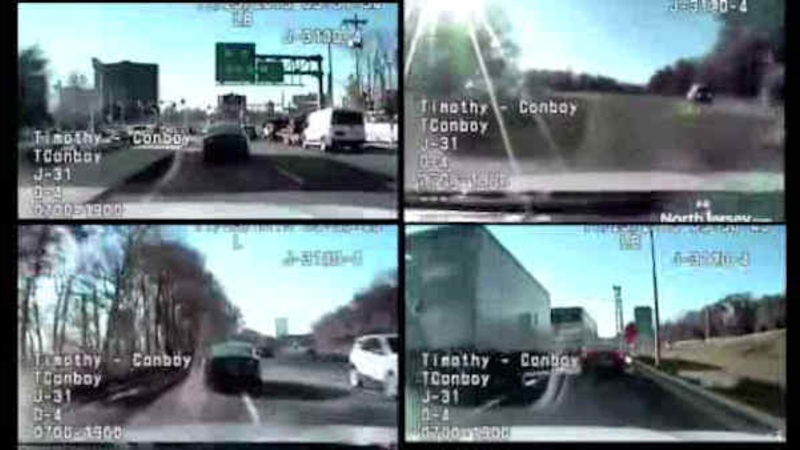 The car hit speeds over 100 miles an hour, yet amazingly, there were no accidents or injuries reported.

The chase was captured on a dashboard camera inside the cruiser of a Palisades Parkway police officer, and audio transmissions narrate as the situation unfolds and the suspect, 45-year-old David Campos, endangers his life and many others.

Then, Campos suddenly veered off the parkway and across the median, through a gas station.

He then headed southbound into northbound traffic on the parkway, stunning motorists desperately trying to swerve out of his way.

He continued driving into oncoming traffic for nearly a full minute. Then, near the George Washington Bridge, Campos exited the parkway onto roads in Fort Lee, flying through red lights and busy intersections.

Officers followed in close pursuit, then learning that Campos was considered armed and dangerous, accused in the stabbing death of his ex-girlfriend hours earlier in her home in Troy, New York.

Watch an extended version of the video here:


About 15 minutes into the chase, near Secaucus, Campos entered the New Jersey Turnpike heading south. On that stretch, Campos allegedly hits speeds nearing 110 miles per hour in a last chance effort to get away.

Eventually, Campos was done in by New Jersey traffic and backups near the Turnpike tolls. He hit a line of tractor trailers, veering onto the right shoulder and trying to get past them. But he soon hit a wall of traffic at the Exit 18 toll plaza.

His high-speed getaway came to half as police surrounded his vehicle and captured him without further incident. Officers reportedly found traces of blood on his clothing.

He remains in Bergen County Jail on New Jersey charges of attempting to elude police. He is awaiting extradition to Troy to face murder charges.