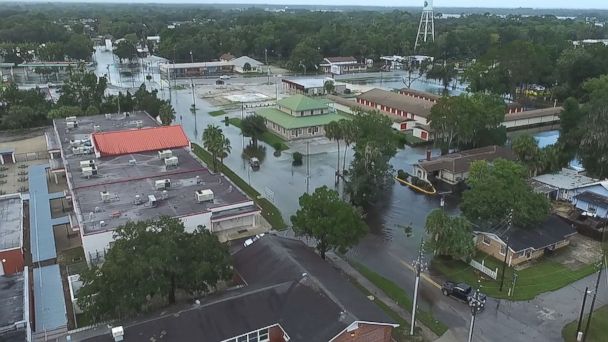 Drone video shows the destruction Hurricane Hermine caused in the south when it made landfall Friday.

The category 1 storm hit the Gulf Coast of Florida early this morning with maximum sustained winds of 50 mph. Drones captured video of the havoc the hurricane wreaked in Crystal River, Florida, showing a residential neighborhood covered in floodwaters.

In Valrico, Florida, an electrical fire engulfed a street corner around 7 a.m.

Another video, posted to Instagram, shows a sinkhole that formed in Pasco Country, Florida. Rain continued to hit the water as it rushed in a counterclockwise circular motion.

As the hurricane crept north it began to damage several areas in Georgia as well. Video taken in Saint Simons Island shows palm trees blowing dramatically in the high winds as waves from the Atlantic Ocean violently crash on the shore.