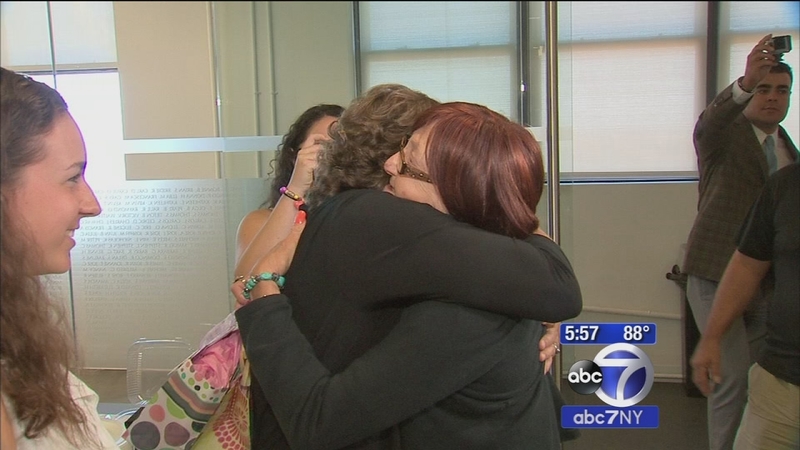 STATEN ISLAND (WABC) -- An emotional meeting was held Friday between the mother of a son who was killed, and a woman who received a new lung because her son's organs were donated.

Three years ago, Zorimar Betancourt's life was turned upside down.

"My son was carjacked on June 4, 2012," she said. 17-year old Stefano Steenbakkers Betancourt, a young man so full of life, was shot and killed in their hometown in Puerto Rico by the carjackers, who got away with nothing.

"He was just a son who comes in the door and gives you bear hugs," said Zorimar.

"He was my big brother, he would always protect me," said the victim's sister Anna.

Now Zorimar and her family are turning tragedy into miracles. Stefano was an organ donor, and his death is allowing others to live on.

A Staten island resident, Joanne has COPD and emphysema. Doctors said she had 3 months to live. Zorimar and her family have flown in from different parts of the globe to meet Joanne, who now has Stefano's left lung.

Little did they know Joanne has also been looking for them.

"Here in New York, New Jersey, Pennsylvania, not in my wildest dreams did i think Puerto Rico," she said.

"She was so nervous for the last two days," said Joanne's daughter Nicole.

Hugs and tears are exchanged for a moment that only 5 percent of organ donors and recipients get the chance to experience.

"This is a very special moment. very special, without you I wouldn't be here," Joanne said.

This is the 4th organ recipient Zorimar has traveled the country to meet. "Meeting the recipients kept me going," she said.

Now the families have a bond very few will truly understand. "It's like an instant connection," Zorimar said.

A bond that can not be broken.

"I owe them my life," Joanne said.