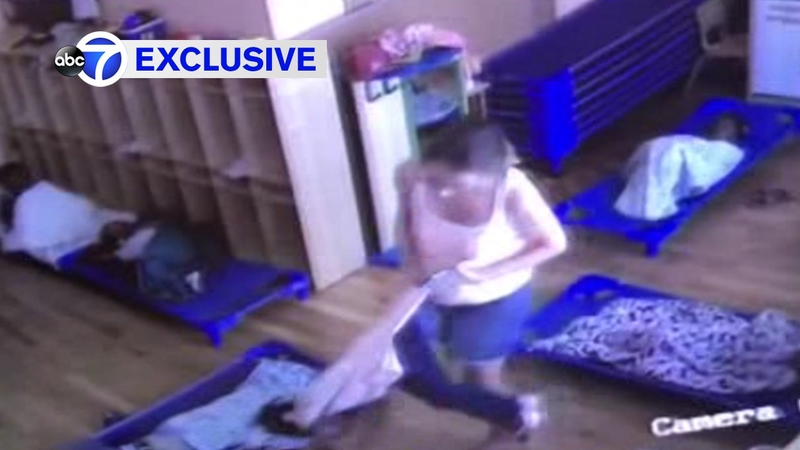 "She sat on my back," said Lauren Henry, victim.

"She sat on your back, did that make you sad?" Richardson asked.

"What did you do?" Richardson asked.

The exclusive video, which is extremely hard to watch, shows Lauren in a white shirt.
EMBED More News Videos

The heavy handed woman is now charged with assault and harassment, that's Ekaterina Silva, who was at the time an employee of the day care on Rogers Ave.

It was nap time last week and Lauren couldn't settle down.

Silva first picks up the toddler, flings her onto a blue cot and swats her behind.

Minutes later, Silva is seen grabbing the child by her shirt, forcing her down and while either sitting on her on next to her, repeatedly pushed Lauren's head down.

At one point, the suspect twisted Lauren's arm and pulled at her legs as Lauren desperately holds onto the bed.

"She sat on her hips and legs, I was like, 'Wow she could have broken her hips anything could have happened to my child,' look how small she is," Gillespie said.

Before seeing the video, the 24-year-old mother of two did meet with Silva, who insisted she did not restrain Lauren.

Gillespie recorded it all with her cell phone.

"I was holding her, but without hurting her, and she came down because she needs this pressure," Silva said.

Gillespie has taken both of her daughters out of the day care.

"I think they should look at the film from months back because who's to say she hasn't done that to other children," Gillespie said.

"When you saw the video, what did you think?" Richardson asked.

Reid says that Silva was a new, temporary employee who had only been working here a week.

"Her defense was she was trained in special education and because the child was out of control, she was holding the child," Reid said.

Lauren is not a special needs student and was hardly out of control.

Reid insists what happened was a fluke.