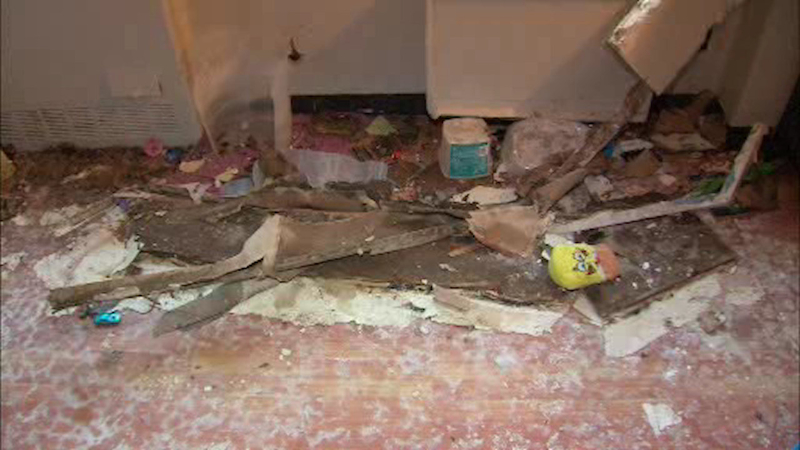 EAST NEW YORK, Brooklyn (WABC) -- Moldy walls, water damage, and holes in the ceiling are all unlivable conditions for anyone.

But those things all exist where a family in Brooklyn calls home, inside a city-owned building.

It was once the bedroom of two young boys, but now it's a filthy, deteriorated, mold-infested mess, and not to mention a dangerous health hazard.

"Because once we are late on our rent, we are getting eviction notices, we have to go court, they sent us to 55 Broadway to fight off the case, but when we need something done, it doesn't get done," said Regina Pridgen, a NYCHA resident.

Regina has been complaining about the busted pipes in the room for more than three years, as she raises both of young sons inside the Glenmore Plaza Homes in East New York.

She says Band-Aid repairs have done nothing and part of the ceiling actually collapsed just a few days ago at 3 a.m.

"I don't allow them access to the bedroom. I took all of their clothes and stuff out of the bedroom. They sleep inside the living room, or they aren't here," Regina said.

Regina's 4-year-old son Micah, who has been forced to sleep in the living room, is now suffering from asthma because of the black mold devouring his old room.

The mother says she had little choice but to go to the media and seek help from community activist Tony Herbert, who believes this kind of neglect in public housing is a citywide crisis.

"This is a pandemic, that's how bad it is right now. Folks are living in deplorable conditions," Herbert said.

"They don't do anything but assess the damage, or they might plaster instead of actually fixing something. Plastering and painting over something, there's still mold growing on the inside," Regina said.

NYCHA officials released a statement Wednesday saying, "These conditions are absolutely unacceptable. Staff will repair the leak in the bedroom tonight and install a new wall tomorrow. Plastering and painting will follow. We apologize for the impact this has had on the family."