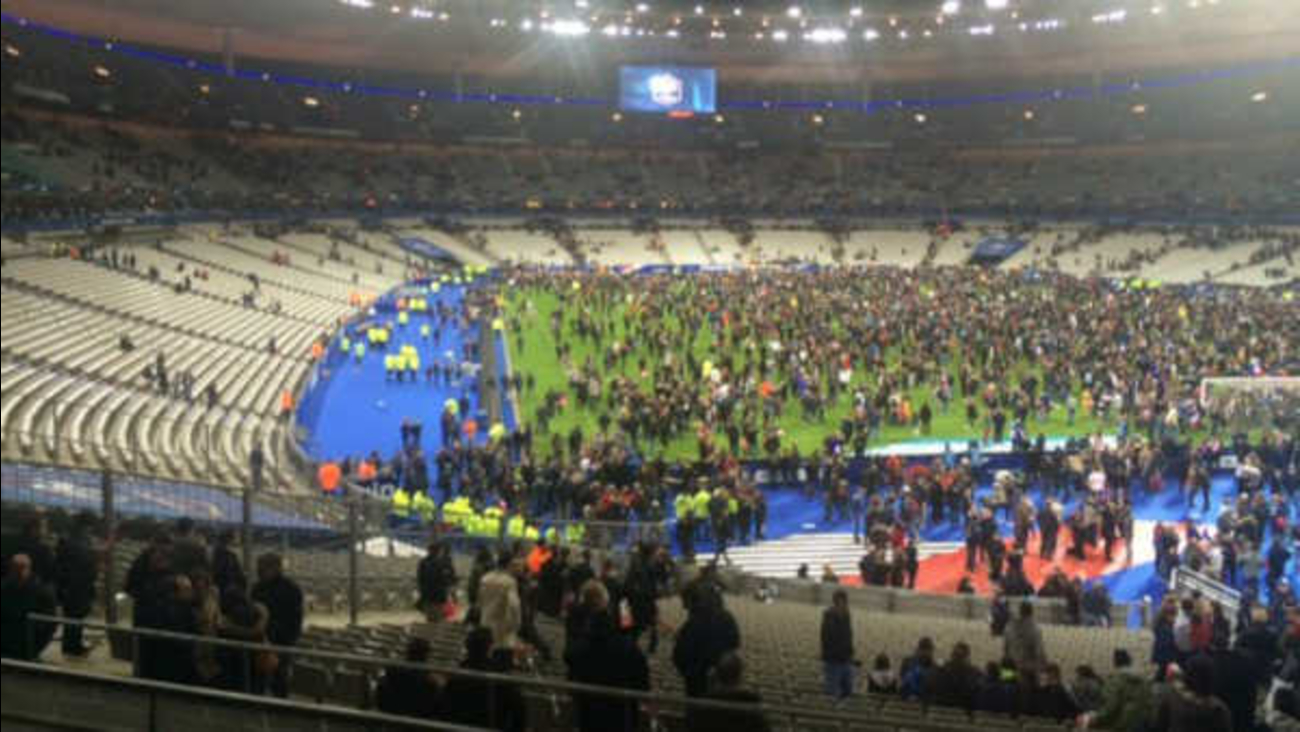 AP
By JEROME PUGMIRE
PARIS -- As news of bloodshed filtered through the crowd and police sirens wailed outside, thousands of soccer fans milled around the Stade de France, reluctant to leave the seemingly safe stadium.

The spectators didn't panic, despite hearing the sounds of explosions from outside - part of the carnage unfolding in the city that left dozens killed in multiple acts of violence. But there was plenty of unease and tension.

During the first half of France's soccer match against Germany on Friday, two explosions went off nearby. The first, at around 9:20 p.m., was a short and crisp bang.

"We heard them, but we thought they were home-made devices or fireworks," soccer fan Frederic Lavergne told The Associated Press as he left the stadium. "We had no idea at the time what it was."

The next "bang" followed only minutes later, clearly audible as it ripped through the chill air.

The noise inside the stadium was low at that point, since there was little excitement in the game, and the sounds of the sirens outside were loud and clear. So was the whirling sounds of the police helicopter buzzing overhead.

By the end of the match, which France won 2-0, the mood was one of silent contemplation as news filtered in through mobile phones and social networks relaying the carnage outside.

What would otherwise have been a celebration of France's win became a night of worry. Some people were still singing near the end, but for most a sickening feeling had taken over.

Moments after the referee had blown his final whistle, hundreds of fans started streaming onto the field. At first, match stewards in their fluorescent tops surely were confused by the commotion. But it was soon clear that the fans just wanted to go onto the field, rather than face going outside.

"We preferred to stay on the field, that's where we felt safest," Lavergne said. "We had difficulty understanding the explanations inside the stadium."

After a second public address announcement reassuring fans that it was safe to leave and to take public transport, fans started moving out.

France will host the European Championship next year, and Friday's match was one of a handful of games remaining for coach Didier Deschamps to test the national team before the tournament.

There will now be doubts as to whether it will be safe to host the tournament, with 24 teams involved in matches across the country.
Related topics:
parisparis terror attack
Copyright © 2020 by The Associated Press. All Rights Reserved.
PARIS TERROR ATTACK