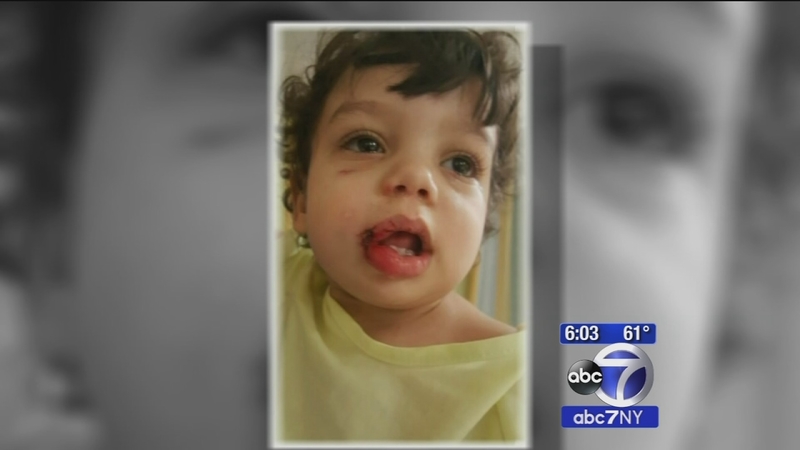 Father speaks out after baby injured in Jersey City shooting

JERSEY CITY, New Jersey (WABC) -- A child is recovering after being shot in the face in Jersey City while his parents were sitting in a car parked on the block.

Surgery at Jersey City Medical Center to remove a bullet from the face of 1-year-old Mina Beshay was successful, but he remained in the hospital Sunday night because he was running a fever and was still in a lot of pain. He was released Monday.

The boy's father, Michel Beshay says when gunfire erupted, he was confused and scared. Now, knowing his son will survive, he says he is angry because he came to this country from Egypt to provide a better life for his kids.

He thinks of the United States as his home, and works two jobs just to provide for his family. Now he is questioning whether he should stay home to protect his kids, or if he even wants to send his kids to school anymore.

"I ask the mayor, if that's your son, what are you gonna do," he said. Mayor Steven Fulop released a statement condemning the violence.

It was just before 3 p.m. Saturday when the child's mother went into the post office.

It was then that witnesses heard about a dozen gunshots. A stray bullet struck the family's Lincoln Sedan, shattering the back window, and hitting Mina, who was strapped into a baby seat in the back.

The child was struck with the bullet, and glass cut him under his eye.

18 month-old Mina Beshay out of surgery after being shot in face. Struck by bullet in cheek and glass under his eye. pic.twitter.com/HpwtMD8PA6

"I was sitting in (the) driver's seat with my daughter and son in the back," Beshay told The Jersey Journal. "Suddenly, I hear shots, about four or five, tat-tat-tat-tat-tat."

Michel Beshay said his first instinct was to move his car and get his children to safety.

"It was only about two or three seconds, I saw back, my back glass was broken and I see my son bleeding. He's still alive, thank God, but easily the bullet could have hit here, here or here," Beshay said as he pointed to his head, eye and chest.

Officials say it appears a bullet fragment became lodged in the baby's right cheek. The baby's uncle says he got a frantic call from his brother after the infant was shot. Mina's 5-year-old sister was also in the car at the time.

His 5 year-old sister Sandra was sitting next to him in car when shot in face. She wasn't injured but traumatized. pic.twitter.com/LOwJl69GJZ

Officials say Mina was an unintended target. Detectives are still searching for the shooter.