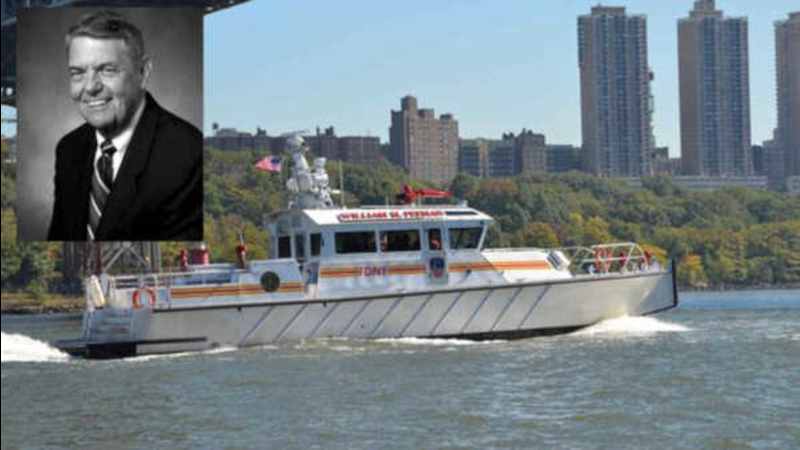 Feehan responded to the World Trade Center and was killed in the collapse of the South Tower. He was the second highest ranking FDNY member killed on 9/11, and at 71-years-old, he was the oldest responder to the site.

Using steel recovered from the World Trade Center, the name William M. Feehan adorns the sides of the boat's cabin.

"With this state-of-the-art fireboat, Bill Feehan will once more serve and protect New York City and its more than 520 miles of coastline," Nigro said. "On every response, this fireboat will honor Commissioner Feehan's bravery, leadership and his 42-year legacy of tremendous service."

The William M. Feehan is a 66-foot long, 90,000 pound, jet-propelled fireboat with the ability to pump more than 8,000 gallons of water per minute. The $4.7 million vessel was built in Canada by Metalcraft Marine and was largely funded through the FEMA's Port Security Grant Program.

The Feehan has multiple fire suppression capabilities on board, including more than 200 gallons of foam and 100-pounds of dry chemical, both of which are used to fight fuel based fires. The boat is equipped with a chemical, biological, radiological and nuclear system to protect firefighters and other passengers within a pressurized and filtered cabin on board. The Feehan's design also allows it to operate and maneuver close to shore in shallow bay areas, including the areas around New York City's airports.

"I'm honored to participate in today's ceremony, which reflects the abiding friendship and partnership between Canada and the U.S., and the City of New York," Prato said. "I am so proud to help christen this fireboat, the William M. Feehan, built in Canada by MarineCraft. It bears the memory and proud name of a decorated, respected FDNY Firefighter whose dedication and service lives on."

Feehan's career with FDNY began as a firefighter with Ladder Company 3 in the East Village in 1959. Throughout his career, Feehan served throughout the five boroughs, holding every uniformed rank. In 1991, he retired as the highest ranking uniformed officer - chief of department. One year later, Feehan was appointed as first deputy commissioner and charged with managing the day-to-day operations and activities of the FDNY across all offices and bureaus. In 1993, he briefly served as acting fire commissioner.