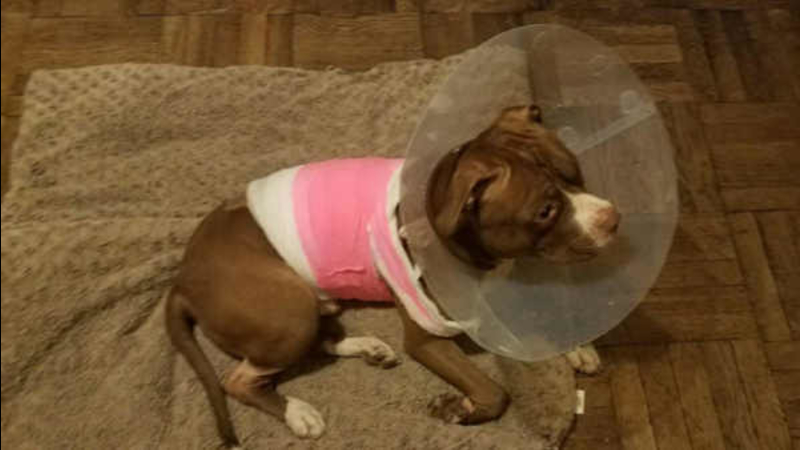 CROWN HEIGHTS, Brooklyn (WABC) -- A teenage girl who was walking her dog in Brooklyn says a man ordered his two dogs to attack her and her pet.

The victim says the man seemed to get pleasure out of the violence.

She saw him on the sidewalk, and says she never imagined he would take the dogs off their leashes and let them loose on her.

"At this point him, his two dogs are pulling me and my dog to over here," said the girl, Keria Williams.

She says two dogs attacked her and her 1-year-old pit bull Colby. The 17-year-old claims the dog's owner did it on purpose, for sport.

"It was like they were torturing my dog. Somebody came over and asked me if I wanted them to kick his dog. And he's screaming at everybody, nobody touches his dogs," she said.

It happened Tuesday evening around 6:30. Keria was walking her dog along Eastern Parkway at Franklin Avenue in Crown Heights.

Her mother got the frightening call that her daughter and their dog were attacked and needed medical attention.

"Clearly he did not have any remorse. He did just leave afterwards. We feel it was done deliberately. And I just want him caught," said the mother, Kishana Weir.

Keria has injuries to her legs and her Colby has serious bite wounds. The family reached out to community activist Tony Herbert for help, hoping to find the dogs and their owner before another attack happens.

"I got a number of calls with this particular issue with this particular person," said Herbert. "However as we stand here more and more people are telling me this is a problem. We have the opportunity to talk to the commanding officer at the precinct and they're going to be on top of this."

"I was hurt, my dog was hurt, I want him found," said Keria.