School bus goes up in flames on Long Island, moments after kids get off 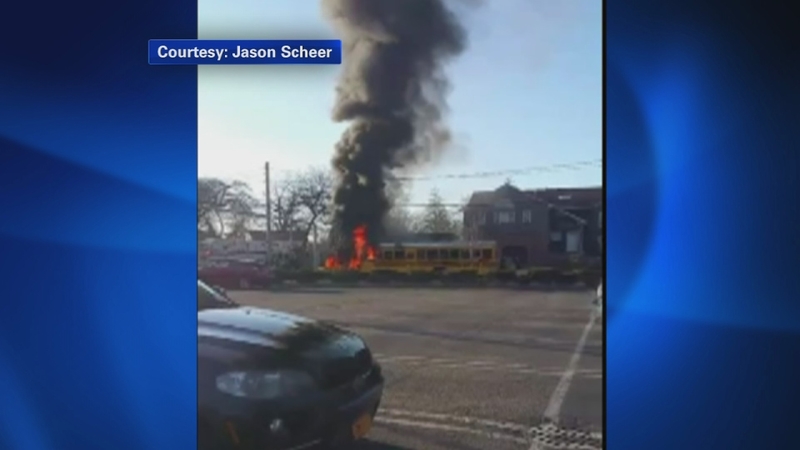 MERRICK, Long Island (WABC) -- A school bus erupted in flames on Long Island Wednesday morning, moments after the children had run off.

But no students were hurt, thanks to the quick actions of the bus driver who saved lives.

Video from the scene shows the empty bus near Lakewood Avenue in Merrick.

The bus became fully engulfed in flames, sending thick smoke into the air.

"Black smoke started to engulf the whole bus and it was coming from the back," said Chiara Ottomano, the owner of Children's Nest.

The cell phone video shows just how intense the fire was.

"For a school bus fire there was a lot of flames and a lot of smoke, we had reports of smoke being seen from miles away," said Ron Luparello of the Merrick Fire Department.

A dozen volunteer firefighters rushed to headquarters in Merrick. Luckily the station house is just a block from where the driver of the bus first started having problems.

The driver was heading to Merrick Avenue Middle School with a dozen students on board, just before 8.

But suddenly at the corner of Merrick and Kirkwood Avenues he smelled smoke, then saw smoke and pulled over.

He spotted what appeared to be a small flame under the hood and didn't waste a second.

He ran back on the bus and quickly got all of the kids off. Less than a minute later, the front of the bus went up in flames.

Two students' fathers even helped put out the blaze. "Between diesel fuel and the fiberglass hood on the bus, that caused a lot of excess smoke," said Luparello.

Chiara runs a daycare center right next to where this happened and was ready to take the students in, if they needed a warm place to stay.

But a second bus arrived and took the kids to school. School officials are calling the driver, who is camera shy, a hero.

He works for Guardian Bus Company, which tells Eyewitness News it could not be more pleased with the level of professionalism he showed, adding he'll soon receive an award, as a thank you.

"The driver was excellent in his duties, he had taken all the children out of the bus before it burst into flames," said Chiara.