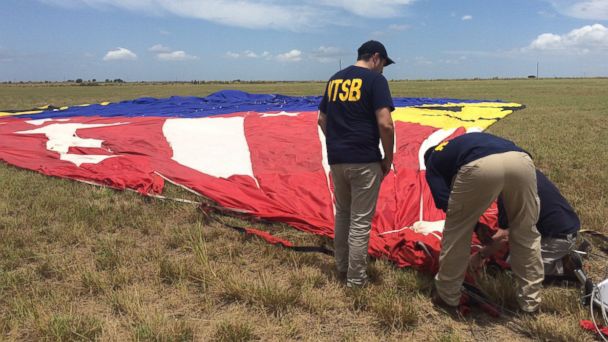 There is evidence that part of the hot air balloon that crashed in a pasture near Lockhart, Texas, struck electrical lines before the fiery tragedy that killed all 16 people on board -- but it's still unclear whether the fire occurred before or after the balloon hit those power lines, federal investigators said today.

The National Transportation Safety Board's Robert Sumwalt said he is hoping the investigators will be able to gather some information from the cell phones found among the wreckage.

The response team said the devices have been completely destroyed, but Sumwalt is remaining hopeful that the NTSB's team of specialists will be able to find some information.

"The FBI evidence response team was able to locate 14 personal electronic devices including cell-phones, one iPad and three cameras," he said.

Sumwalt said the balloon traveled eight miles after taking off at around 7 am.

Witnesses to the crash Saturday morning described hearing popping sounds and then seeing a blaze of flames.

"The popping sound was the balloon connecting with the electric lines and then by the time I turned and saw the fireball go up, the basket was on the ground," witness Margaret Wylie said.