How Ivanka Trump Spoke to 'Majority of Americans' at RNC 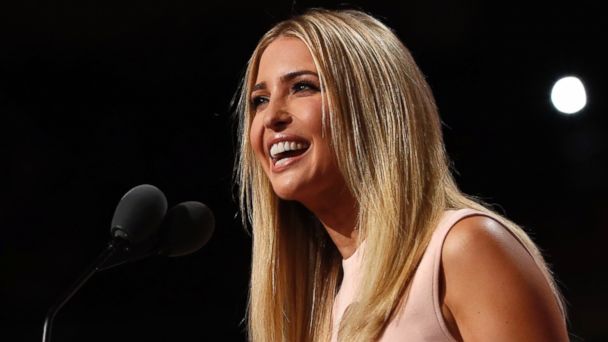 Ivanka Trump's address at the Republican National Convention Thursday not only spoke to Republicans, but also to Democrats, according to at least one expert.

She "talked to a majority of Americans, more so than any other speech" at the four-day Cleveland convention, ABC News chief political analyst Matthew Dowd said today.

She's a registered independent voter, a role that makes her "an asset" for the New York real estate developer, Dowd noted.

"That is where she comes from and talks from," Dowd said. "As an independent voter, you are free not have to adhere to a partisan platform."

The 34-year-old began her speech: "Like many of my fellow millennials, I do not consider myself categorically Republican or Democrat."

"More than party affiliation, I vote based on what I believe is right for my family and for my country. Sometimes, it's a tough choice. That is not the case this time. As the proud daughter of your nominee, I am here to tell you that this is the moment, and Donald Trump is the person, to make America great again."

As she delved into specifics about the "real change" she said her father would bring, she brought up some policy points often stressed by Democrats, including gender equality, equal pay, affordable child care and college debt.

Ivanka Trump said there were women at her father's job sites "long before it was commonplace."

"My father values talent. He recognizes real knowledge and skill when he finds it," she said. "He is color blind and gender-neutral. He hires the best person for the job, period.

"When Donald Trump is in charge, all that counts is ability, effort and excellence," she said. "This has long been the philosophy at the Trump Organization. At our family's company, there are more female than male executives."

Then there's quality, affordable child care, which Hillary Clinton has promised to work to implement, if elected.

Ivanka Trump said Thursday, "At our family's company ... women are paid equally for the work that we do and, when a woman becomes a mother, she is supported not shut out."

"Women represent 46 percent of the total U.S. labor force and 40 percent of American households have female primary breadwinners. In 2014, women made 83 cents for every dollar earned by a man. Single women without children earned 94 cents for each dollar earned by a man, whereas married mothers made only 77 cents. As researchers have noted, gender is no longer the factor creating the greatest wage discrepancy in this country, motherhood is.

"As president, my father will change the labor laws that were put in place at a time in which women were not a significant part of the workforce and he will focus on making quality child care affordable and accessible for all.

"As the mother of three young children, I know how hard it is to work while raising a family and I also know that I am far more fortunate than most," she said. "American families need relief. Policies that allow women with children to thrive should not be novelties, they should be the norm."
Related topics:
abc newsnational
Copyright © 2021 ABC News Internet Ventures.
TOP STORIES
COVID Updates: 3 more cases of omicron found in NY
Mayor: Supervised injection sites have reversed 9 overdoses in NYC
Suspect wanted in knifepoint robbery inside junior high school in NYC
Police search for gunman after 2 men shot on subway train
Parents charged in school shooting arrested, plead not guilty
1 person killed in New Jersey house fire
How unusual to charge parents in school shooting? EXPLAINED
Show More
Homeowners burn down house in attempt to get rid of snakes
AccuWeather: Decent Saturday
SUNY chancellor has support of trustees amid calls for resignation
10-year-old prodigy sells out gallery at prestigious art fair
Tensions between US, Russia escalate ahead of Biden-Putin call
More TOP STORIES News