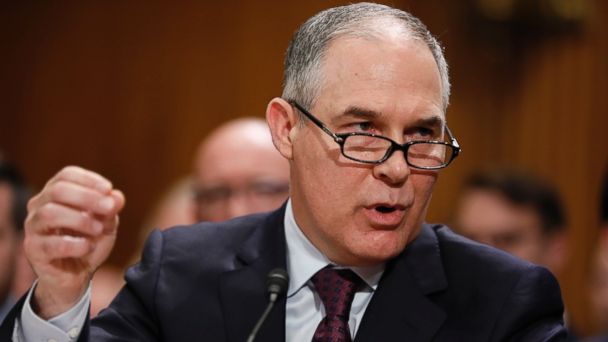 ABCNews
By MICHAEL EDISON HAYDEN
As Scott Pruitt, President-elect Trump's choice to head the Environmental Protection Agency, testifies before the Senate today for his confirmation hearing, many pundits have noted that, if approved, he would make an unconventional administrator, largely because of the degree to which he built parts of his career fighting the very regulatory enforcement agency he would be tasked with running.

Pruitt, along with other parties, has sued the EPA more than a dozen times during his career as Oklahoma's attorney general, attempting to block the EPA's authority to enforce clean air, clean water and climate regulations.

With these lawsuits, Pruitt gained a reputation as a pro-business attorney general who believed strongly in the rights of states to set their own limits on environmental matters. Several of the lawsuits are still ongoing or have entered an appeal stage, while others have been dismissed.

"In their wisdom, Congress gave states a primary role in emissions regulation, noting in the statement of policy of the Clean Air Act that 'air pollution control at its source is the primary responsibility of states and local governments,'" Pruitt wrote in his May 2015 testimony before the Senate Environmental and Public Works Subcommittee on Clean Air and Nuclear Safety.

David Spence, a professor of law, politics and regulation at the University of Texas at Austin, told ABC News that Pruitt, as a pro-energy sector lawyer, would most likely attempt to first weaken federal air pollution laws, which he said energy companies believe have become more stringent under the Obama administration.

"Rules that have hit the coal industry hardest will likely be tackled first," Spence said, explaining that's because the industry has been among the most vocal in objecting to more stringent regulations.

Spence said this is likely to be welcome news to the coal industry, which has been hurt not only by the laws, but by changes in the market as a result of a boom in fracking.

"We have had significant concerns with a series of regulations coming out of EPA the last several years," Phil Smith, director of Communications and Governmental Affairs from the United Mine Workers of America, told ABC News when asked about Pruitt's confirmation hearing.

Smith noted that the United Mine Workers of America was one of the plaintiffs in litigation against the EPA regarding various regulations on the coal industry, including the Clean Power Plan (CPP) and the New Source Performance Standards (NSPS).

"We believe the CPP and NSPS are flawed, overstep the agency's authority and should be withdrawn and rewritten," Smith said.

Smith expressed optimism about the changes that might be created under a shift in leadership at the EPA.

"We look forward to working with an EPA that not only fulfills its environmental mission but also takes into account the impacts of its rules on working families and their communities," Smith said.

But many environmental protection advocates say that because things such as air pollution or water contamination aren't limited by state boundaries, it makes sense to protect natural resources on a federal level.

"A uniform level of environmental protection is supposed to keep us safe, no matter where we travel in this country," said John Walke, the director of the Clean Air Project at the National Resources Defense Council, a nonprofit environmental advocacy group.

Walke warned that these federal laws are important to saving lives.

He has written several posts for NRDC's website condemning Pruitt as the choice to lead the EPA, and has called him "unfit" and "extreme" in his positions on the environment, largely because Walke believes strong federal regulations are needed to sufficiently protect our natural resources. He also worked on the Supreme Court case against Pruitt about the EPA's cross-state air pollution rules. Pruitt ultimately lost his bid to fight the EPA's regulations in that case.

Federal regulations set the baseline for what states are required to do regarding environmental protection, Walke told ABC News.

Two-thirds of states choose to do no more than what is required of them by the EPA while the other third of states -- including New York and California -- set higher standards than required at the federal level, Walke said.

New York State, for example, banned in 2015 the controversial process of hydraulic fracking, a technique designed to recover gas and oil from shale rock that is employed heavily in states such as Oklahoma. Pruitt has said he supports fracking, and said in May to the House Committee on Science, Space and Technology that "as natural gas becomes increasingly affordable, it becomes an increasingly attractive alternative to coal."

The split in state requirements is largely divided along ideological lines, Walke noted, with regions with a majority of Republicans in positions of leadership generally more likely to adhere to the minimum requirements. Should EPA regulations be weakened, Walke said, many states would likely lower the bar for environmental regulations.

A February 2016 study conducted by the Pew Research Center said that "state governments play a key role in environmental regulatory policy" and that stronger regulations are more popular in states where voters prefer Democrats.

"I can predict with confidence that Mr. Pruitt will try to weaken federal law," Walke said, explaining that in achieving that goal, states like Oklahoma would do less to protect its air and water.

Mr. Pruitt's office did not respond to ABC News's request for comment on this topic. But in his aforementioned 2015 Senate testimony, he framed his opposition to EPA regulations as part of a general philosophy that states like Oklahoma know best how to handle what happens within their borders.

"States are able to engage in a cost-benefit analysis to strike the necessary balance between protecting and preserving the environment, while still creating a regulatory framework that does not stifle job growth and economic activity," Pruitt wrote in his Senate testimony.

Pruitt also noted that states have a direct stake in protecting the environment.

"States like Oklahoma care about these issues because we breathe the air, drink the water, and want to preserve the land for future generations," Pruitt also wrote in his Senate testimony, going on to say that the state did so while considering the economic impact of such regulations.

However, because borders do not bind things like air currents, Walke countered that such a philosophy can create health hazards for people living outside of a given state's jurisdiction.