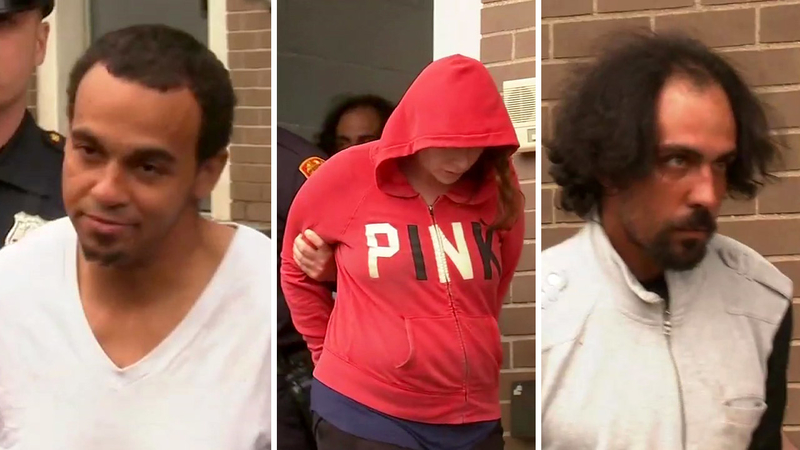 RONKONKOMA, Long Island (WABC) -- One of the men suspected in a series of knifepoint robberies on Long Island admitted "I'm a heroin addict," when asked why he allegedly committed the string of 18 holdups in recent months, police said.

Shane Cashmore, 30, is charged with first degree robbery in the eight incidents in Suffolk County, and is facing similar charges for 10 other incidents in Nassau County.

Watch raw video of the suspects in custody, as well as Cashmore talking with reporters:
EMBED More News Videos

Raw video shows police walking the suspects in a string of robberies on Long Island.

Cashmore, who is homeless with a connection to the Ronkonkoma area, is believed to be the knifepoint robber behind the 18 incidents, law enforcement said. He will be arraigned in both Suffolk and Nassau counties.

"We have no doubt Mr Cashmore is responsible for these 18 robberies. We are glad to bring this spree to an end," said Suffolk County Police Commissioner Timothy Sini. "There is also evidence that these individuals were suffering from substance abuse disorder and were likely committing robberies to fuel their addiction."

The case was cracked after investigators determined that the getaway car was an extremely rare 2006 Hyundai Tiburon, only manufactured between 1999 and 2008.

With less than 200 models of the vehicle registered on Long Island, Brooklyn and Queens, detectives located their suspect vehicle by examining data on license-plate readers and other surveillance cameras.

Meanwhile, an officer remembered that he had arrested an occupant of the that vehicle on a drug charge about a month ago.

They obtained a court order to place a GPS tracking device on one of the suspect's vehicles, and began around the clock surveillance for about two weeks.

The vehicle was located Monday night in West Hills Road in Oyster Bay.

Police then went to New York Avenue in Huntington Station, parking on nearby Presidents Street. Investigators immediately recognized there where "a number of locations in the vicinity that matched the pattern" for another potential robbery - including the Carvel.

He noted that Hyundai was under surveillance at the time of the Sunday robbery of The Barn in Lake Ronkonkoma, but it was not used and Drab and Pantaleone were not involved in that holdup.

Pantaleone is the registered owner of the Hyundai, but Cashmore frequently drove it.

The 17th robbery in the pattern was at The Barn convenience store in Lake Ronkonkoma Sunday morning.

A suspect armed with a knife held up the worker and fled the scene.

At that point, the robber was suspected of hitting 17 stores - 10 in Nassau and seven in Suffolk. Two were attempted robberies in the spree that began on Feb. 13.