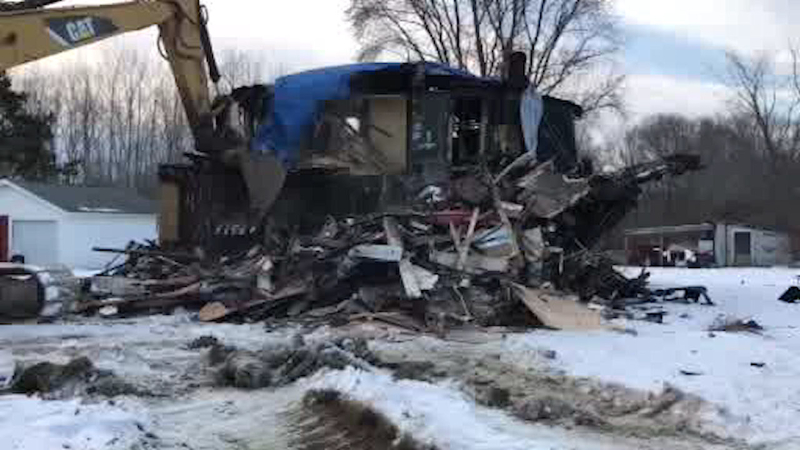 7 On Your Side helps fire victims get fire insurance check

MIDDLETOWN, New York (WABC) -- The homeowners thought they had their bases covered. They were fully insured, ready for anything. But after their home burned to the ground, they say they couldn't get a dime of insurance money, and you'll never guess where the six figure check was.

It was the wails of a mom, watching her home where she raised two kids, burn to the ground.

Her boys, along with Stephanie Knapp's brother and two dogs, all barely made it out alive.

She lost everything in that devastating October 8th fire. It consumed the house David Knapp's grandfather built in Middletown. Now he can't even get inside.

But two months after it was condemned, not one burned board has been touched.

"We were going to proceed with demo and the mortgage company told me nothing could be done with this home," Stephanie said.

Her insurance check was for $181,000 and was sent to her mortgage company. More than a month later, the Knapps haven't received a dime.

"If they had done something we would have been in by Christmas," Stephanie said.

Stephanie blames their mortgage company for paperwork requests she says never ended. But after faxing them contracts and demolition quotes:

"The continued calls every day two-to-three times a day no answer no response," said Stephanie.

They're at a standstill, without money to even demolish the house.

"Everything is coming out of pocket," Stephanie said.

The Knapps reached out to 7 On Your Side. We contacted their mortgage provider, who told us it was waiting on one more document, the homes original appraisal form.

By that same afternoon, the call they had been waiting to get finally arrived.

"They said, 'Mrs. Knapp everything's been approved,' and I thought about time," Stephanie said.

Finally, there were two checks to pay the builder and the demo.

Their new home will be delivered first week of January. The mortgage company helped hours after hearing from 7 On Your Side, but wouldn't comment about the delay citing privacy issues.

It's a good idea, to review your policy to see if you're covered for rent if you're displaced. The Knapps were surprised they weren't covered for hotel stays or any of the contents in their home, and they lost everything.
Related topics:
middletowninsurancehouse fire7 on your side
Copyright © 2021 WABC-TV. All Rights Reserved.
7 ON YOUR SIDE
What to buy and what to skip on Amazon Prime Day
Tips to avoid short-term summer rental scams
Delivery sends heavy truck tires rolling down stairs, causing hundreds in damage
Buying your first home in a red-hot housing market
TOP STORIES
Suspect fatally shot by agents during kidnapping investigation in NJ
LIVE | NJ Gov. Murphy holds COVID update
NYC ready to move homeless out of hotels, back to shelters: Mayor
Violent, multi-vehicle crash leaves 2 dead, 3 injured in NJ
What to buy and what to skip on Amazon Prime Day
NYC to hold vaccination contest for $2,500 prizes in July
80-year-old rescued, 3 hurt as flames shoot from NYC apartment building
Show More
NY officer charged in high-speed crash that killed motorcyclist
NYC renames parks to honor Black American experience
LIVE: Biden speaks after hours of talks with Russia's Putin
MacKenzie Scott's $2.7B donation: At least 8 NY area recipients
Man wanted for brutally beating man in head with cobblestone
More TOP STORIES News